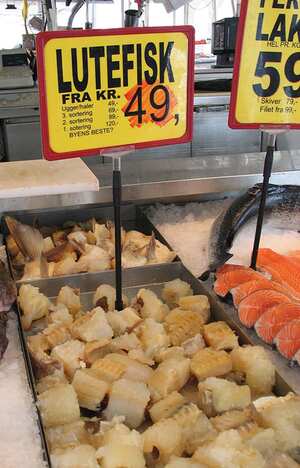 Lutefisk is a traditional dish of the Nordic countries made from stockfish (air-dried whitefish) or dried/salted whitefish (klippfisk) and soda lye (lut). Its name literally means "lye fish", because it is made using caustic lye soda derived from potash minerals.

The first treatment is to soak the stockfish in cold water for five to six days (with the water changed daily). The saturated stockfish is then soaked in an unchanged solution of cold water and lye for an additional two days. The fish will swell during this soaking, attaining an even larger size than in its original (undried) state, while its protein content decreases by more than 50 percent, producing its famous jelly-like consistency. When this treatment is finished, the fish (saturated with lye) has a pH value of 11 - 12, and is therefore caustic. To make the fish edible, a final treatment of yet another four to six days of soaking in cold water (also changed daily) is needed. Eventually, the lutefisk is ready to be cooked.

In Finland, the traditional reagent used is birch ash. It contains high amounts of potassium carbonate and hydrocarbonate, giving the fish a more mellow treatment than would sodium hydroxide (lyestone). It is important to not incubate the fish too long in the lye, because saponification of the fish fats may occur, effectively rendering the fish fats into soap. The term for such spoiled fish in Finnish is saippuakala (soap fish).

In the Nordic Countries, the "season" for lutefisk starts early in November and typically continues through Christmas. Lutefisk is also very popular in Nordic-North American areas of Canada, especially the prairie regions and the large Finnish community at Sointula on Malcolm Island in the province of British Columbia, and the United States, particularly in the Upper Midwest and Northwest. From October to February, there are numerous lutefisk feeds in cities and towns around Puget Sound.

Lutefisk is usually served with a variety of side dishes, including, but not limited to, bacon, green peas, green pea stew, potatoes, lefse, gravy, mashed rutabaga, white sauce, melted or clarified butter, syrup, geitost (goat cheese), or "old" cheese (gammelost). In the United States in particular it is sometimes eaten together with meatballs. Side dishes vary greatly from family-to-family and region-to-region, and can be a source of jovial contention when eaters of different "traditions" of lutefisk dine together.

Today, akvavit and beer often accompany the meal due to its use at festive and ceremonial occasions (and most eaters, regardless of side dish preferences, will argue that these beverages complement the meal perfectly). This is a recent innovation, however; due to its preservative qualities, lutefisk has traditionally been a common "everyday" meal in wintertime.

Lutefisk prepared from cod is somewhat notorious, even in Scandinavia, for its intense (and to those unacquainted to the dish, offensive) odour. Conversely, lutefisk prepared from pollock or haddock contains almost no odour. Lutefisk eaters thrive on quotes and jokes from skeptics of lutefisk comparing it to everything from rat poison (which has a hint of truth to it, because of the traces of nonstandard amino acid lysinoalanine found in lutefisk due to the reaction with lye) to weapons of mass destruction.

"Every Advent we entered the purgatory of lutefisk, a repulsive gelatinous fishlike dish that tasted of soap and gave off an odour that would gag a goat. We did this in honor of Norwegian ancestors, much as if survivors of a famine might celebrate their deliverance by feasting on elm bark. I always felt the cold creeps as Advent approached, knowing that this dread delicacy would be put before me and Iâd be told, "Just have a little." Eating a little was like vomiting a little, just as bad as a lot."