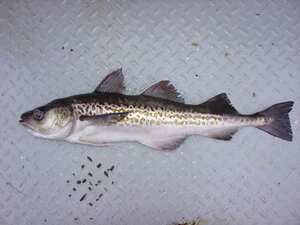 Pollock (or pollack) is the common name used for either of the two species of marine fish in the Pollachius genus. Both P. pollachius and P. virens are commonly referred to as pollock. Other names for P. pollachius include the Atlantic pollock, European pollock, lieu jaune, lythe, and pollock; while P. virens is sometimes known as Boston blues (separate from bluefish), coalfish (or coley) or saithe.

Atlantic pollock is largely considered to be a white fish, although it is a fairly strongly flavoured one. Although traditionally a popular source of food in some countries like Norway, in the United Kingdom it has previously been largely consumed as an economic and versatile alternative to cod and haddock in the West Country, elsewhere being known mostly for its traditional use as "Pollack for puss / coley for the cat." However, in recent years pollock has become more popular due to over-fishing of cod and haddock. It can now be found in most supermarkets as fresh fillets or pre-prepared freezer items.

Because of its slightly gray colour pollock is often prepared, as in Norway, as fried fish balls or if juvenile sized maybe breaded with oatmeal and fried as in Shetland. Year old fish are traditionally split, salted and dried over a peat hearth in Orkney where their texture becomes wooden and somewhat phosphorescent. The fish can also be salted and smoked and achieve a salmon like orange colour (although it is not closely related to the salmon), as is the case in Germany where the fish is commonly sold as Seelachs or sea salmon.

or walleye pollock (Theragra chalcogramma) is a North Pacific species of the cod family Gadidae. While related to the common Atlantic pollock species of the same family, the Alaska pollock is not a member of the same Pollachius genus.

The Norwegian pollock (Theragra finnmarchica), a rare fish of Norwegian waters, may actually be the same species as the Alaska pollock.

High quality, single frozen whole Alaska pollock fillets may be layered into a block mold and deep frozen to produce fish blocks that are used throughout Europe and North America as the raw material for high quality breaded and battered fish products. Lower quality, double-frozen fillets or minced trim pieces may also be frozen in block forms and used as raw material for lower quality, low-cost breaded and battered fish sticks, portions, etc.

Single frozen Alaska Pollock is considered to be the premier raw material for surimi; the most common use of surimi in the United States is "imitation crabmeat" (also known as crab stick).

Alaska pollock is commonly used in the fast food industry, for example the fish filet of Dairy Queen, Arby's, and Burger King are also made from Alaska pollock. McDonald's uses Hoki and/or pollock in their Filet-O-Fish sandwich.