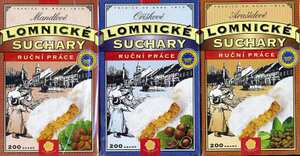 The finished product must meet the following requirements in the sensory test:

Texture - hard, crunchy, crisp Flavour and odour specific to the individual variety, with a hint of orange (lemon) peel. The rusks must not have a burnt, bitter or stale taste or any other foreign taste or odour.

The rusks are intended for direct consumption. ‘Lomnické suchary’ are made from plain wheat flour, refined sugar, hydrogenated fat, yeast, dried milk and dried egg yolks, cinnamon, vanilla, orange (lemon) peel and debittered peach and apricot kernels. Dried egg yolk can be replaced by a quantity of fresh egg yolks equivalent to the dry matter. Ground hazelnuts, almonds and peanuts respectively are added to the individual varieties. The diabetic rusks do not contain flavouring and sorbitol is substituted for sugar.

The technological process can be summarised as follows: the prepared ingredients, according to the recipe for a given type of rusk, are placed in the mixer and mixed thoroughly. A prepared leavening agent and potable water are added to the mixed ingredients, which are then kneaded to a stiff dough. Slices are cut from the dough, left to rise and then rolled into long loaves which are placed in greased tins and left to rise for up to three days in a warm place. After rising, they are baked in an oven heated to a temperature of between 240 and 250 °C. As the oven is closed, it is sprinkled with water to steam the dough which is baked for 30-45 minutes. The baked rusk loaves are left to cool and, after softening, are cut into even slices and rolled individually in icing sugar. The sugared rusk slices are dried in the oven at a temperature of 190 to 200 °C, after which they are evened out and sent for packaging. The rusks are wrapped in aluminium foil of food quality and those packages are placed in printed cardboard boxes. In order to preserve their quality, the products must be packaged as soon as the manufacturing process is complete. ‘Lomnické suchary’ are crunchy and absorb humidity easily. If transported in larger quantities, therefore, they could deteriorate in quality by breaking and becoming moist. A further aim is to enhance the traceability of the product.

References to ‘Lomnické suchary’ can be found in a number of publications (e.g. J. Mizera — Město sucharů a textilu Lomnice nad Popelkou (Lomnice nad Popelkou: town of rusks and textiles), J. Fučík — Popis a dějiny okresu Lomnického n.P. (Description and history of the district of Lomnice nad Popelkou)) and in articles in the press (Lidové noviny, Týden v Libereckém kraji).