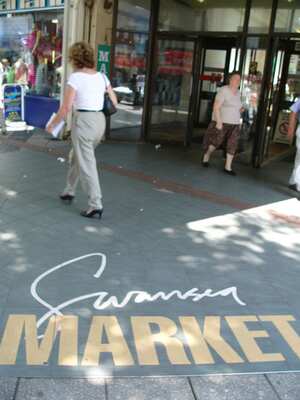 Laverbread is a traditional Welsh delicacy made from laver. Laver is often associated with Penclawdd and its cockles, being used traditionally in the Welsh diet and is still eaten widely across Wales in the form of laverbread. To make laverbread, the seaweed is boiled for several hours then minced or pureed. The gelatinous paste that results can then be sold as it is, or rolled in oatmeal.

Laverbread is traditionally eaten fried with bacon and cockles for breakfast. It can also be used to make a sauce to accompany lamb, crab, monkfish, etc, and to make laver soup. Richard Burton has been attributed as describing laverbread as "Welshman's caviar".

Swansea Market has several stalls selling only laverbread and cockles from the nearby Gower peninsula. The source of the seaweed used to make laverbread was historically the Gower coastline. There are still small producers of Gower laverbread, though it is now mainly along the Pembroke coast.

In addition to Wales, laverbread is eaten across the Bristol Channel in North Devon, especially around the Exmoor coast around Lynmouth and Combe Martin.

Laver is highly nutritious because of its high proportions of protein, iron, and especially iodine. It also contains high levels of vitamins B2, A, D and C.