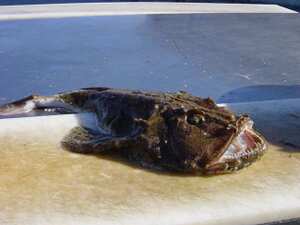 Monkfish taste wonderful, but in their native state look pretty vile. In Spain they are often sold whole, but in the UK you are only likely to see the tails, filleted and skinned.

Monkfish can be quite a good substitute for prawns, although it's probably more expensive.

Monkfish is at its best and in season during the following months: August, September, October, November, December & January.