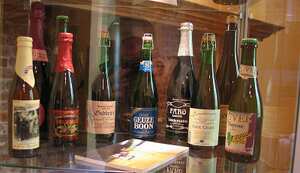 Lambic is a very distinctive type of beer brewed only in the Pajottenland region of Belgium (southwest of Brussels) and in Brussels itself at the Cantillon Brewery and museum. Lambic is now mainly consumed after refermentation, resulting in derived beers such as Geuze or Kriek.

Unlike conventional ales and lagers, which are fermented by carefully cultivated strains of brewer's yeasts, lambic beer is instead produced by spontaneous fermentation: it is exposed to the wild yeasts and bacteria that are said to be native to the Senne valley, in which Brussels lies. It is this unusual process which gives the beer its distinctive flavour: dry, vinous, and cidery, with a slightly sour aftertaste.

Types of lambic and derived beers

Most, if not all varieties listed below have Traditional Speciality Guaranteed (TSG) status.

Historically, a low-alcohol, sweetened beer made from a blend of lambic and a much lighter, freshly brewed beer (called meertsbier, not necessarily a lambic) to which brown sugar (or sometimes caramel or molasses) was added. Sometimes herbs were added as well. The use of the lighter beer (or even water) and of substandard lambic in the blend made this a cheap, light, sweet beer for everyday use. The 19th century French poet Charles Baudelaire commented on Faro's (to him) disagreeable aftertaste, "It's beer that you drink twice", believing that the Faro in Brussels was brewed from the waters of a river (the Senne or Zenne) that was also used as a sewer.

The sugar was originally added shortly before serving, and therefore did not add carbonation or alcohol to the beverage (because the sugar did not have the time to ferment). Modern faro beer is still characterised by the use of brown sugar and lambic, but is not necessarily a light beer. The use of meertsbier has disappeared, and modern faro is not viewed as cheap or light. Modern faro is bottled, sweetened and pasteurized to prevent refermentation in the bottle.

Lambic refermented in the presence of sour cherries (morello cherry) and with secondary fermentation in the bottle results in kriek.

Lambic with the addition of raspberry (strawberry), peach (pêche), blackcurrant (cassis), grape (druif), or strawberry (aardbei), as either whole fruit or syrup. Other, rarer fruit lambic flavourings include apple (pomme), banana (banane), pineapple (ananas), apricot (abricotier), plum (prunier), cloudberry (plaquebière), lemon (citron), and blueberry (bleuet). Fruit lambics are usually bottled with secondary fermentation. Although fruit lambics are among the most famous Belgian fruit beers, the use of names such as kriek, framboise or frambozen, cassis, etc. does not necessarily imply that the beer is made from lambic. The fruit beers produced by the Liefmans brewery, for example, actually use a brown ale (Oud Bruin), rather than a lambic as a base.