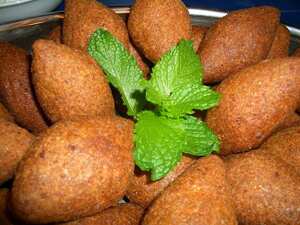 Kibbeh ( or kibbe, kubbeh, kibbeh or kubbah) is a burghul dumpling stuffed with chopped meat and spices. Some varieties are fried and some are cooked in a broth. Kibbeh is popular in the Levant, and sometimes referred to as the national dish of Lebanon. It is also a common food in Israel, North Africa, Turkey, Cyprus, the Arabian world, Armenia, Brazil and the Dominican Republic.

Kibbeh is probably best known as a 7 to 15 cm-long torpedo-shaped bulgur shell stuffed with a filling based on spiced minced lamb and fried till brown. British soldiers in the Middle East during the Second World War used to call these kibbeh "Lebanese torpedoes"

Kibbe can also be a mixture of chopped meat (either lamb or beef), burghul, onion, mint and spices, pressed into a flat baking pan. Then it is scored with a knife into diamond shapes about one or two inches in length, topped with pine nuts or almond slivers and butter, then baked in the oven until done.