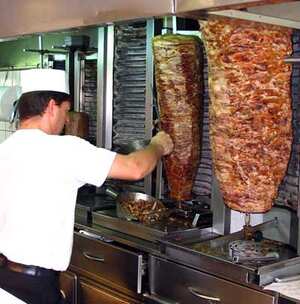 Kebab (Gyros or gyro) is a Greek fast food;. It is a kind of meat roasted on a vertical rotisserie. By extension, gyros may refer to the pita sandwich it is often served in, with various salads and sauces. The most common fillings are tomato, onions, and tzatziki sauce. French fries are a common side dish. Sometimes the name is applied to the form of the sandwich (pita wrapped around filling) rather than to the filling itself, and sometimes the name "souvlaki" is applied to the sandwich.

The Arabic shawarma and Mexican tacos al pastor are similar to gyros, all derived from the Turkish döner kebab which was invented in Bursa in the 19th century.

The word kofta is derived from Persian kūfta: In Persian, کوفتن (kuftan) means "to beat" or "to grind" or meatball.

The meat is often mixed with other ingredients such as rice, bulgur, vegetables, or eggs to form a smooth paste. Koftas are sometimes made with fish or vegetables rather than red meat, especially in India. They can be grilled, fried, steamed, poached, baked or marinated, and may be served with a rich spicy sauce. Variations occur in North Africa, the Mediterranean, Balkans, Asia and India. According to a 2005 study done by a private food company, there were 291 different kinds of kofta in Turkey, where it is very popular. In Arab countries, kufta is usually shaped into cigar-shaped cylinders.

We currently have a number of recipes for Kebabs: