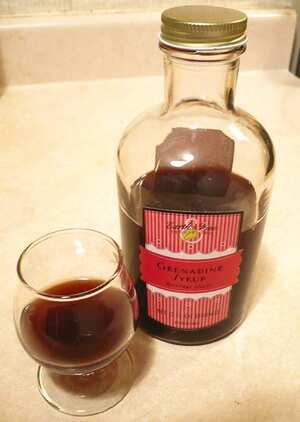 Grenadine is traditionally a red syrup. It is used as an ingredient in cocktails, both for its flavour and to give a pink tinge to mixed drinks. "Grenadines" are also made by mixing the syrup with cold water in a glass or pitcher, sometimes with ice.

The name "grenadine" comes from the French word grenade meaning pomegranate, as grenadine was originally prepared from pomegranate juice, cherry juice, and sugar. However, "grenadine" is also a common name mistakenly applied to syrups and beverages consisting of other fruit juices (e.g. raspberry, redcurrant, blackberry) and sugar syrup. The characteristic flavour can be obtained from a mixture of blackcurrant juice and other fruit juices with the blackcurrant flavour dominating.

The food industry, however, has widely replaced grenadine fruit bases with artificial ingredients. The Mott's brand "Rose's", by far the most common grenadine brand in the United States, is now formulated entirely out of a high-fructose corn syrup base (yuk!).