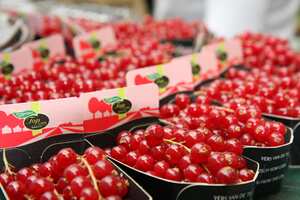 The Redcurrant (Ribes rubrum) is a member of the genus Ribes in the gooseberry family Grossulariaceae, native to parts of western Europe (France, Belgium, Netherlands, Germany, and northern Italy).

Redcurrant fruit is slightly more sour than its relative the blackcurrant, and is cultivated mainly for jams and cooked dishes, rather than for eating raw. For example, in Scandinavia it is often used in fruit soups and summer puddings, and in Germany it is also used in combination with custard or meringue as a filling for tarts. However, unlike the cranberry, it certainly can be enjoyed in its fresh state and without the addition of sugar.

Separating berries from the vine

Using a fork, hold the bunch of berries by the top of the vine over a large bowl and gently pass the tines (prongs) of the fork down through the stems a few times. Experiment with different sized forks and with the tines either facing up or down (sometimes both ways works best).

How much does one cup of redcurrants weigh?

Redcurrants are at their best and in season during the following months: July & August.