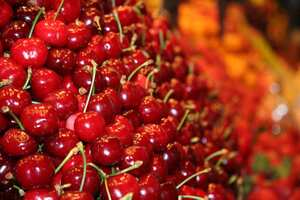 A cherry is a fleshy fruit (drupe) that contains a single stony seed. The cherry belongs to the family Rosaceae, genus Prunus, along with almonds, peaches, plums, apricots and bird cherries.

Cherries work very well with fatty meats such pork and duck where recipes like cherry salsa help to balance the flavours.

Try adding them to cous cous for extra colour and flavour.

A maraschino cherry is a preserved, sweetened cherry, typically made from light-coloured sweet cherries such as the Royal Ann, Rainier, or Gold varieties. The cherries are first preserved in a brine solution usually containing sulphur dioxide or alcohol, then soaked in a suspension of food colouring (common red food dye, FD&C Red 40), sugar syrup, and other components.

They are commonly used as a garnish in cocktails.

The black cherry, wild black cherry, rum cherry, or mountain black cherry (Prunus serotina), is a woody tree belonging to the genus Prunus. This cherry is native to eastern North America: including eastern Canada. In the mid 20th century it was widely introduced into Western and Central Europe as an ornamental tree where it has become locally naturalised.

The fruit is a drupe, 1 centimetre (0.39 in) in diameter, green to red at first, ripening to black; it is usually astringent and bitter when eaten fresh, but also somewhat sweet. The fruit is readily eaten by birds.

The fruit of Prunus serotina is suitable for making jam and pies, and has some use in flavouring liqueurs; they are also a popular flavouring for sodas and ice creams. The black cherry is commonly used instead of sweet cherries (Prunus avium) to achieve a sharper taste. It is also used in cakes which include dark chocolate, such as a Black Forest gateau and as garnishes for cocktails.

The wood of P. serotina is also used for cooking and smoking foods, where it imparts a unique flavour.

How much does one cup of cherries weigh?

Cherries are at their best and in season during the following months: May & June.