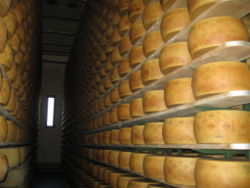 The cheese was created by the Cistercian monks of Chiaravalle who used ripened cheese as a way of preserving surplus milk. By the year 1477, it was regarded as one of the most famous cheeses of Italy. Today, similar products are made in the regions of Emilia-Romagna, Lombardy, Piemonte, Trentino, and Veneto.

Like Parmesan, Grana Padano is a semi-fat, hard cheese which is cooked and matured slowly (for up to 18 months). It is produced by curdling the milk of grass-fed cows. The cows are milked twice a day; the milk is left to stand, and then partially creamed. It is produced year round and the quality can vary seasonally as well as by year. Generally similar to Parmesan it is less crumbly, milder and less sharp tasting than its famous relative.

A wheel of Grana Padano is cylindrical, with slightly convex or almost straight sides and flat faces. It measures 35 to 45 cm in diameter, and 15 to 18 cm in height. It weighs 24 to 40 kg per wheel. The rind, which is thin, is white or straw yellow.