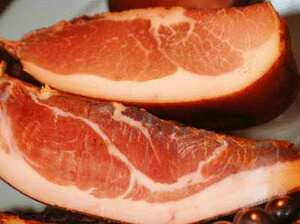 The external colour of Gailtaler Speck is golden yellow, the cut is bright red with a white fat portion. Gailtaler Speck has a well developed, cured, smoky and meaty taste, which is only slightly spicy and mildly salty. Of firm consistency, it is tender to bite and dissolves softly on the tongue.

The production area comprises the municipalities Kötschach-Mauthen, Dellach, Kirchbach, Gitschtal, Hermagor, St. Stefan im Gailtal, Nötsch im Gailtal, Feistritz an der Gail and Hohenthurn. The pigs which are used to produce Gailtaler Speck originate from the Gail valley and, if necessary, from other regions of the Land Carinthia.

In the past, the main reason for producing bacon was so that meat could be kept for a long time. Gailtaler Speck developed into a widely known and regionally distinctive product through the special climate-based maturing conditions, the exclusive use of pigs grown slowly and fattened on high-quality feed, and the use of traditional production methods and handed-down recipes. Experience historically handed down from one generation to the next determines the length of each stage in turning fresh pork into a culinary high-quality processed product. The producers' knowledge and experience concerning seasonal and climatic variations in production conditions enable them to optimise the timing of production. The key to this optimal and, within Carinthia at least, unique bacon production is to utilise the Gail valley's specific climatic conditions: steady temperature and humidity, long hours of sunshine, limited fog formation in winter and clearing southerly winds. Stable air movement and only slight variations in temperature and humidity enable the product to dry evenly. The slow maturing process gives the bacon its special aroma and means that it can be kept for a long time.

The production of bacon in the Gail valley area has been documented from as long ago as the fifteenth century. Travel reports, farm inventories and servants' food lists testify to bacon's importance in the diet of the Gail valley's inhabitants. That importance was attained particularly because smoking and air-drying enabled it to be kept for long periods.

The method of production is recorded in the Gailtaler Speck guidelines. The guidelines govern the basic products' origin and quality and the production process, define the product characteristics and contain provisions on safeguarding quality, whereby all producers of Gailtaler Speck are responsible for ensuring complete verifiability. The cuts, whose pH value must not exceed 5.8, are marinated in an unpressed state by means of a dry curing process during which cooking or curing salt, pepper, garlic and other spices and herbs are added in accordance with traditional recipes which have been handed down. This extracts water from the meat and inhibits the growth of harmful micro-organisms. Marination takes place, preferably on traditional wooden marination tables or in curing tubs made of plastic or high-grade steel, at 4C to 0C and approximately 70 % humidity for one to four weeks. The marinated material is then hung up until completely dry. The dry marinated material is hung in the curing chamber, where it is cured at temperatures not exceeding 22C. The only fuel used is beech wood, to which juniper twigs are added to obtain the distinctive smoke aroma. The curing process is interrupted several times by letting in fresh air to give the bacon its special aroma. Each producer's experience and acquired skill determine the exact juncture at which fresh air is let in and the exact length of each curing interval. After the curing process, the bacon is taken to the ripening room, where temperatures of 8C to 16C and relative humidity of 60 % to 80 % must be maintained. Depending on the cuts used, it remains there for four to 12 weeks to mature fully. At 25 % fat content, dehydration leads to 30 % to 40 % of fresh weight being lost.