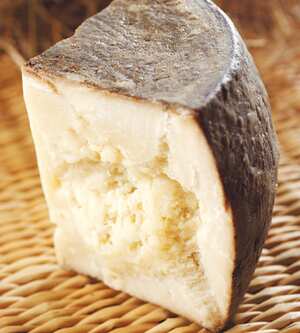 Fiore Sardo is a DOP ewes' milk cheese from Sardinia.

Description: whole milk hard, uncooked cheese, varying in maturity depending on use (table cheese or for grating); the shape consists of two flattened truncated cones with horizontal bases joined by the main base.

Geographical area: the entire territory of the autonomous region of Sardinia.

Background: a very old cheese said to originate from before the Roman conquest. The cheese tradition is exclusively Sardinian in origin so that the milk used comes solely from sheep from local breeds. Etymologically, the name of the product refers to the former coagulating agent of vegetable origin as well as to the characteristic colour of the curd. As it relates to the sheep-rearing tradition in Sardinia generally, over time the cheese has come to be named after the geographical name referring to the entire region.

Production method: the curds, obtained from whole sheep's milk with the addition of lamb's and/or kid's rennets undergo milling and then are pressed into suitable moulds, salting and ripening follow, the latter also includes smoking by natural means.

Link: as for the natural factors, the particular characteristics of the areas intended for sheep-rearing in Sardinia, using pastureland rich in natural essences which gives particular characteristics to the milk sent for turning into cheese, should be borne in mind. As for the human factors, the socio-economic importance of traditional sheep-farming for the island's population must be pointed out as it is often the sole source of income in areas without alternative resources.