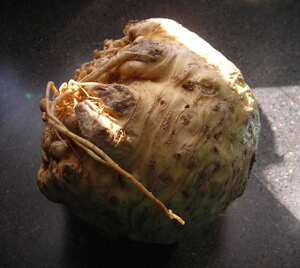 Celeriac is also known as 'celery root,' 'turnip-rooted celery' or 'knob celery'. It is a kind of celery, grown as a root vegetable for its large and well-developed taproot rather than for its stem and leaves. The root is typically used when it is about 10–12 cm in diameter; about the size of a very large potato. Unlike other root vegetables, which store a large amount of starch, celery root is only about 5-6% starch by weight.

Celeriac may be used raw or cooked. It has a tough, furrowed, outer surface which is usually sliced off before use because it is too rough to peel. Celeriac has a celery flavour, and is often used as a flavouring in soups and stews; it can also be used on its own, usually mashed, or used in casseroles, gratins and baked dishes.

The hollow stalk of the upper plant is sometimes cut into drinking straw lengths, rinsed, and used in the serving of tomato-based drinks such as the Bloody Mary cocktail. The tomato juice is thus lightly flavoured with celery as it is sucked up and passes through the stalk.

Celeriac normally keeps well and should last three to four months if stored between 0°C and 5°C and not allowed to dry out.

How much does one cup of celeriac weigh?

Celeriac is at its best and in season during the following months: October, November, December, January, February & March.