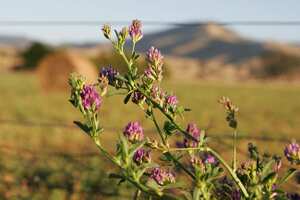 Alfalfa (Medicago sativa) is a flowering plant in the pea family Fabaceae cultivated as an important forage crop. In the UK it is known as lucerne and lucerne grass in south Asia.

Alfalfa is a cool season perennial legume living from three to twelve years, depending on variety and climate. It resembles clover with clusters of small purple flowers. The plant grows to a height of up to 1 metre (3 ft), and has a deep root system sometimes stretching to 4.5 metres (15 ft). This makes it very resilient, especially to droughts. The plant exhibits autotoxicity, which means that it is difficult for alfalfa seed to grow in existing stands of alfalfa. Therefore, it is recommended that alfalfa fields be rotated with other species (e.g. corn, wheat) before reseeding.

Alfalfa sprouts can be eaten in salads and sandwiches, for example. Tender shoots are eaten in some places as a leaf vegetable. Human consumption of fresh mature plant parts is rare and limited primarily by alfalfa's high fibre content. Dehydrated alfalfa leaf is commercially available as a dietary supplement in several forms, such as tablets, powders and tea. Alfalfa is believed by some to be a galactagogue, a substance that induces lactation.

In early Chinese medicines, physicians used young alfalfa leaves to treat disorders related to the digestive tract and the kidneys. In Hindu societies, ayurvedic physicians used the leaves for treating poor digestion. They made a cooling poultice from the seeds for boils. At the time, alfalfa was also believed to be helpful towards people suffering from arthritis and water retention.

It is majorly used in homeopathic medicines worldwide. Today, alfalfa is suggested for treating anemia, diabetes, to extend appetite and contribute towards weight gain, as a diuretic for increased urination, for indigestion and bladder disorders, alfalfa can also be used as an estrogen replacement in order to increase breast milk and to mitigate premenstrual syndrome, a dietary supplement, and to lower blood cholestrol levels.