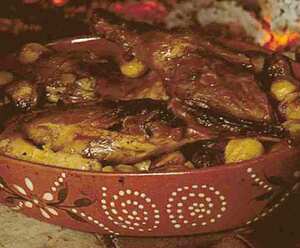 IGP Cabrito da Gralheira is the refrigerated carcass of kid (male and female) weighing up to 6 kg including the head and heart, liver and lungs.

Evidence: Established through use, particularly due to descriptions given in works by Orlando Ribeiro and Aquilino Ribeiro.

Method of production: From animals of the Serrana breed, with a live weight less than or equal to 10 kg.

Link: This Serrana breed is perfectly suited to the specific conditions of the area delimited by the Serra massifs of Caramulo, Gralheira, Montemuro and Nave-Lapa. The goat meat reflects the special conditions of feeding and rearing,

Gastronomy: IGP Cabrito da Gralheira must be stored at a temperature of 7°C, or between -18°C and -20°C if it is frozen. Once bought the meat can only be kept a few days in the fridge. This meat is usually cooked in the oven or stewed or grilled on wood fires. It is an ingredient in many local, traditional recipes, the most famous of which being the so-called assadeira. To make it the IGP Cabrito da Gralheira is first stuffed with a mixture based on traditional local sausages and the offal of the animal. It is then fried with onion and placed in a wood oven to roast. This meat is also used in the preparation of the famous chanfana, in which the abundant use of red wine ensures that the meat remains tender and moist.