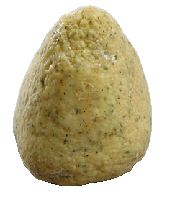 Boulette de Papleux is a soft, unpasteurised cows' milk cheese from the Nord-Pas de Calais region of France. It is an unusual in that rather being made from fresh curd, it is made by kneading rejected Maroilles cheeses. It is flavoured with herbs, pepper and other spices according to taste of the producer and then steeped in beer . It is very spicy and strong, both in taste and aroma.