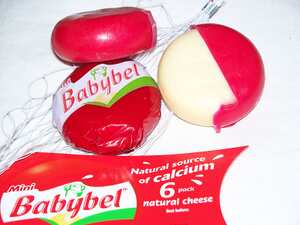 Babybel is a brand of cheese sold internationally. It began in 1865, with the founding of “Etablissements Jules Bel” in Orgelet, France. In 1947, the brand Bonbel was introduced.

This pressed cheese is easily recognisable due to its distinctive red wax. In 1977, the miniature Babybel version appeared as Mini Babybel which is marketed as a uniquely natural and convenient snack. Manufactured by the French group Fromageries Bel, it is produced in Évron in the department of Mayenne.

The original Mini Babybel is encased in red wax. Other varieties are available such as Mini Babybel Light in red wax with a light blue label, the Cheddar variety in purple wax, the Emmental variety (known as Swiss in Canada) in yellow wax, Gouda in gold wax or the goats’ cheese variety in green wax. The original and Light varieties of Mini Babybel are produced using Edam cheese.

The original and light Mini Babybel cheeses (red wax) are suitable for vegetarians, but the other varieties are made with animal rennet.

If the Babybel cheese is not listed below, select a similar type of cheese from the list below to get a rough idea for the number of calories in Babybel cheese.