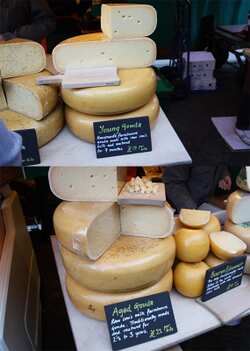 Gouda is a yellow BGA cheese made from cows' milk. The cheese is named after the city of Gouda in the Netherlands, but its name is not protected. Gouda cheese is sold around the world.

The cheese is made from cows' milk that is cultured and heated until the curd is separate from the whey. Some of the whey is then drained, and water is added. This is called "washing the curd", and creates a sweeter cheese, as the washing removes some of the lactic acid. About ten percent of the mixture is curds which are pressed into circular moulds for several hours. These molds are the essential reason behind its traditional, characteristic shape. The cheese is then soaked in a brine solution which gives the cheese its rind and distinctive taste. The cheese is then dried for a couple of days before being coated to prevent it from drying out, then it is aged, depending on age classification, for a number of weeks to over 7 years before it is ready to be eaten. As it ages it develops a caramel sweetness and sometimes has a slight crunchiness from protein crystals that form in older cheese.

Locally, old Gouda (aged between 12 and 18 months, orange to yellow in colour and sometimes discernible by a black paraffin wax coating) can be obtained. This strong tasting cheese is hard and often too brittle to cut using a slicer, but it can be sliced by knife or served cut in cubes, with drinks. Smoked Gouda which is a processed cheese and Leyden cheese are also popular variations.

If the Gouda cheese is not listed below, select a similar type of cheese from the list below to get a rough idea for the number of calories in Gouda cheese.