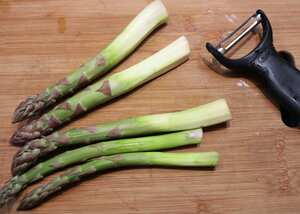 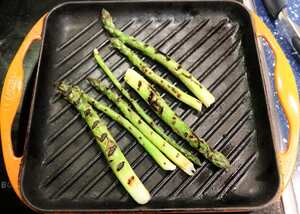 Brush with olive oil and griddle for 4 minutes 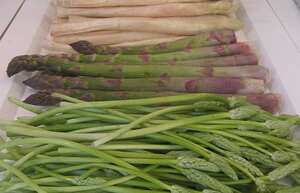 Only the young shoots of asparagus are eaten. Asparagus is low in calories, contains no fat or cholesterol, and is very low in sodium. It is a good source of folic acid, potassium, dietary fibre, and rutin. The amino acid asparagine gets its name from asparagus, the asparagus plant being rich in this compound.

The shoots are prepared and served in a number of ways around the world. In Asian-style cooking, asparagus is often stir fried. Cantonese restaurants in the United States often serve asparagus stir fried with chicken, shrimp, or beef, also wrapped in bacon. Asparagus may also be quickly grilled over charcoal or hardwood embers. It is also used as an ingredient in some stews and soups. In the French style, it is often boiled or steamed and served with hollandaise sauce, melted butter or olive oil, Parmesan cheese or mayonnaise. The best asparagus tends to be early growth (meaning first of the season) and is often simply steamed and served along with melted butter. Tall asparagus cooking pots allow the shoots to be steamed gently.

Asparagus can also be pickled and stored for several years. Some brands may label them as "marinated" which means the same thing.

Asparagus grown for consumption needs to be checked daily as the shoots very quickly become inedible and grassy.

To cook asparagus evenly, especially tougher, large out-of-season asparagus, using a speed peeler, shave the skin from around the stump-end so the spear is an even circumference along the whole length. Rub with a little olive oil and salt and griddle until lightly charred. They are also nice, grilled and served with a little beurre noisette.

How much does one cup of asparagus weigh?

Asparagus is at its best and in season during the following months: April, May & June.