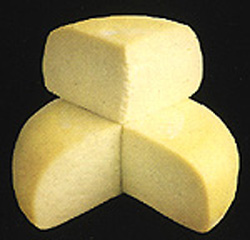 DOP Arzúa-Ulloa cheese is made from unpasteurised cows' milk which, following a production process encompassing the stages of coagulation, cutting and washing of the curd, moulding, pressing, salting and maturation, acquires the following characteristics:

Arzúa-Ulloa: Maturation period of at least six days. Its shape may be either convex or cylindrical, its edges rounded, its diameter between 100 and 260 mm and its height between 50 and 120 mm. The cheese can never be taller than the length of its own radius. It may weigh between 0,5 and 3,5 kg. The rind, which is thin and elastic, is of medium to dark yellow in colour and shiny, clean and smooth. The cheese may be put up for sale with a transparent colourless slimicide. The paste is uniform in colour, ranging from ivory white to pale yellow; it is shiny, with no cracks, although it may have a small number of small angular or rounded eyes irregularly distributed through it. Its aroma is milky, reminiscent of the smell of butter and yogurt, with light hints of vanilla, cream and hazelnut. Its taste is essentially of milk, slightly salty and medium to low acidity. The texture is fine, slightly to averagely moist, not too firm and of medium elasticity. In the mouth it is averagely firm, soft and soluble and of medium springiness.

Farm-manufactured Arzúa-Ulloa: Made from cows' milk entirely sourced from cows from the farm in which the cheese is made. Its physical characteristics are the same as those set out in the section above.

Matured Arzúa-Ulloa: Maturation period of at least six months. Its shape is convex or cylindrical, its upper surface may be concave, its diameter is between 120 and 200 mm and its height between 20 and 100 mm. It may weigh between 0,5 and 2 kg. The rind is not differentiated, is deep yellow in colour and shiny and greasy in appearance; it may be covered with a transparent colourless slimicide. The paste is deep yellow in colour, paler towards the centre, very compact and may have a few eyes. Its aroma is very intense and milky, smelling strongly of slightly rancid butter. The smell is pungent and sharp. The flavour is salty, not very acid and of medium to low bitterness. It is mostly reminiscent of butter, with light vanilla and nut notes which may vary between the centre and the outer edge. The overwhelming sensation is one of sharpness. The aftertaste is also bitter and of butter and vanilla. Its texture is hard and difficult to cut, and may have some fissures, mostly towards the edges, which will be drier. It feels homogenous and very compact to the touch. It is high in fat content and low in moisture.

The area for producing the milk and making the cheeses covered by the Protected Designation of Origin ‘Arzúa-Ulloa’ comprises the following municipalities:

The soil and weather conditions of the defined area are ideal for the development of natural meadows and growing foraging crops which have traditionally sustained a significant herd which, at present, is essentially intended for milk production.

In order to check whether the requirements of the specifications and the quality manual have been complied with, the control body will be able to rely on the records maintained by the livestock farm, the first buyers (intermediaries in the chain between the livestock farms and the cheese dairies), cheese dairies and cheese maturing centres. Only milk obtained from holdings entered in the relevant register may be used for making cheese under the ‘Arzúa-Ulloa’ Protected Designation of Origin. Similarly, only cheeses made and matured in the cheese dairies and ageing facilities listed in the relevant registers may obtain the protection of the Protected Designation of Origin ‘Arzúa-Ulloa’.

The cheese is made only from whole raw milk from Rubia Gallega, Pardo Alpina and Friesian cows or cross-breeds of the three on guaranteed holdings entered in the register of the Protected Designation of Origin. The livestock is fed mostly on fodder produced on the holding itself; feeding is by grazing, weather permitting. Concentrated feed of vegetable origin acquired from outwith the holding must be used only as a supplement to cover the energy needs of the livestock and must be sourced, so far as possible, from within the defined area. The milk contains neither colostrum nor preservatives and must generally meet the requirements laid down by the relevant legislation. The milk may not undergo any form of standardisation and must be stored at a temperature of not more than 4 °C in order to prevent the development of micro-organisms.

Production of the cheese involves the following procedures:

Coagulation: Coagulation is induced using animal rennet or other coagulation enzymes authorised in the quality manual, at temperatures of between 30 and 35 °C, for a period ranging from 30 to 75 minutes depending on the condition of the milk and the curdling process.

Cutting and washing of the curd: The curd must be cut to the size of a grain of corn (5 to 10 mm diameter). Washing then takes place in potable water to reduce the acidity of the curd.

Moulding: The cheese must be moulded in the shape of a cylinder the size of which must be such as to conform to the weights and measurements set out above.

Pressing: The length of the pressing process varies according to the pressure applied and the size of the pieces.

Salting: Salting must be in the vat over the curds and/or by dipping the cheeses in brine. The latter must be kept refrigerated to avoid undesirable microbiological changes. Cheeses must remain in it no more than 24 hours.

Ageing: This process must take place on premises with a relative humidity level of between 75 and 90 % and a temperature of less than 15 °C. The maturation period must be of six days from the end of the pressing process, or from the salting if the latter is by soaking in brine. In the case of cured cheeses, the minimum maturation period must be six months. During the period of maturation, the cheeses must be turned over and cleaned as necessary in order to acquire their special characteristics.