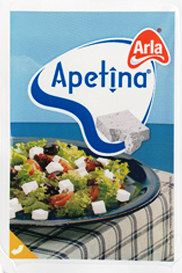 Apetina is the new name for Danish Feta. An EU ruling decided that only Feta produced in Greece would be allowed to call itself as such. This was partly because Greek Feta is made from the milk of goats and ewes and that the terrain on which the animals grazed is very different to that of Denmark.

Apetina is a semi-hard cheese produced from cowsâ milk by Arla Foods, who also market Lurpak butter. It is mild, fresh, tangy and creamy and contains only a small amount of tyramine. This makes it suitable for people who suffer migraines when they eat cheese.

The cheese is available in sealed blocks and is also sold in cubes as Apetina Natural. Other cubed varieties include Apetina Light and Apetina Snack with red peppers or with garlic and olives. Currently it is available in Asda, Waitrose and Tesco.

If the Apetina cheese is not listed below, select a similar type of cheese from the list below to get a rough idea for the number of calories in Apetina cheese.