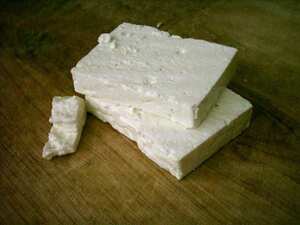 Feta is a brined curd cheese traditionally made in Greece with ewes' milk and goat's milk. Since 2005, feta has been a protected designation of origin in the European Union, and defined as having at least 70% sheep's milk, with the remainder being goat’s milk. Outside the EU, cheeses sold as 'feta' may include cows' milk.

Feta is an aged cheese, commonly produced in blocks, and has a slightly grainy texture. It is used as a table cheese, as well as in salads, pastries and in baking, notably in the popular phyllo-based dishes spanakopita ("spinach pie") and tyropita ("cheese pie").

Feta is salted and cured in a brine solution (based on water or whey) for several months. Feta dries out rapidly when removed from the brine. Feta cheese is white, usually formed into square cakes, and can range from soft to semi-hard, with a tangy, salty flavour that can range from mild to sharp. The cured cheese easily crumbles. Its fat content can range from 30 to 60 percent; most is around 45 percent milk fat.

Feta is also an important ingredient of Greek salad. Feta, like most cheeses, can also be served cooked;

If the Feta cheese is not listed below, select a similar type of cheese from the list below to get a rough idea for the number of calories in Feta cheese.