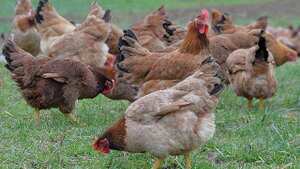 The départements of Seine Maritime, Eure, Calvados, Manche, Ome and districts adjacent to these départements.

All of the links in the network are listed (hatcheries, food producers, breeders, abattoirs). Documentary records are kept for every batch of poultry : declaration by the breeder of birds added to his stock, delivery slips for day old chicks, declaration of departure for the abattoir and receipts for collection of carcasses from the abattoir, declaration of the labels used for the poultry after slaughter and declaration of downgraded poultry. The labels are all numbered. Checks on the consistency of the above information mean that the origin of the product can always be traced.

The link with the geographical origin of the product derives from the following factors:

Historical reputation, linked to the existence during the 19th century and up to the 1960s of poultry-breeding on every farm in the region. The existence of numerous local varieties at the turn of the century, six of which are still extant, reflects the popularity of this production, which was sold at major regional poultry markets. The structure of the farms and the climate of the region lent themselves to the development of commercial rearing. Production was restructured during the seventies.

Present reputation: The award of the Red Label testified to the superior quality of the product and served as a means of consolidating its reputation. Normandy poultry has a good reputation in its own region as well as in and around Paris.