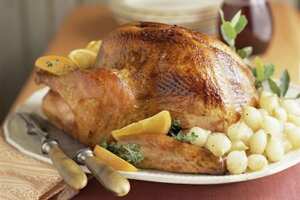 A capon (from Latin caponem) is a cockerel that has been castrated to improve the quality of its flesh for food and, in some countries like Spain, fattened by forced feeding. In the United Kingdom, birds sold as capons are chemically or physically castrated cocks.

The origins of caponised chickens are contested. Such culinary practices existed far-east within ancient China as well as Europe from Greek and Roman empires. One of the earliest records of caponisation occurred during the time of the Roman Republic. The Lex Faunia of 162 BC forbade fattening hens to conserve grain rations. To get around this the Romans instead castrated roosters, which resulted in a doubling of size. It was also practised later throughout medieval times with gastronomic texts describing capons as preferred poultry since the ordinary fowl of the farmyard was regarded as peasant fare and "popular malice crediting monks with a weakness for capons."

The practice of caponisation found its way in modern-day America through the east of Philadelphia where the industry is predominant. Today the nation of France is internationally renowned for maintaining a strong caponisation tradition with widespread and established industries throughout the country.

Caponisation is the process of turning a cockerel into a capon. Caponization can be done by surgically removing the bird's testes, or may also be accomplished through the use of estrogen implants. With either method, the sex hormones normally present are no longer effective. Caponisation must be done before the rooster matures, so that it develops without the influence of sex hormones. Capons, due to the lack of male sex hormones, are not as aggressive as normal roosters. This makes capons easier to handle and allows capons to be kept together with other capons since their reduced aggressiveness prevents them from fighting.

The lack of sex hormones results in meat that is less gamey in taste. Capon meat is also more moist, tender and flavourful than that of a cockerel or a hen, which is due not only to the hormonal differences during the capon's development but also because capons are not as active as roosters, which makes their meat more tender and fatty.

Capons develop a smaller head, comb and wattle than those of a normal rooster.

Capons are fairly rare in industrial meat production. Chickens raised for meat are bred and raised so that they mature very quickly. Industrial chickens can be sent to market in as little as five weeks. Capons produced under these conditions will taste very similar to conventional meat, making their production unnecessary.

Capon is produced in France, in many regions, notably Gers and Jura regions. It is a speciality of Bresse (Chapon de Bresse), where it has its own appellation to differentiate it from other capons from other regions. In Bresse, it is exclusively produced from the Bresse blue foot breed (patte bleue), and fed a certain diet which makes it even more tender than from other regions and breeds, making it the world's best, most sought after and expensive chicken.

It is also produced in many regions of northern Italy, such as Piedmont, Friuli-Venezia Giulia, Emilia-Romagna and Marche. In the early 20th century, capon was commonly eaten for the main family feast on Christmas in Tuscany and northern Italian regions, which was a rare treat for peasant or working class families.