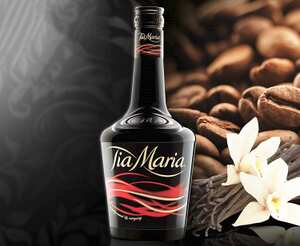 The drink was invented by Dr. Evans in Jamaica just after World War II. He invited acquaintances from the Country Club in Kingston to try various formulas at his lab until the final version was accepted.

The Tia Maria brand was bought by the industry giant Pernod Ricard through their Malibu-Kahlúa International subsidiary in 2005, for distribution in France. It was sold to Illva Saronno in 2009.

It can be consumed pure and with ice, but is also frequently used as an ingredient for cocktails, with coffee, or in desserts (such as the layered liqueur-whipped-cream-and-cookie confection known as Tia Maria torte). It may also be mixed with milk and ice.