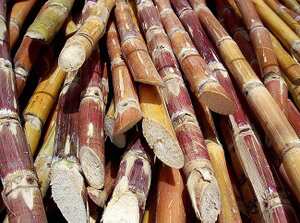 Sugarcane (Saccharum) is a genus of 6 to 37 species (depending on taxonomic interpretation) of tall perennial grasses (family Poaceae, tribe Andropogoneae), native to warm temperate to tropical regions of the Old World. They have stout, jointed, fibrous stalks that are rich in sugar and measure 2 to 6 meters tall. All of the sugar cane species interbreed, and the major commercial cultivars are complex hybrids. In most countries where sugarcane is cultivated, there are several foods and popular dishes derived from it, such as: