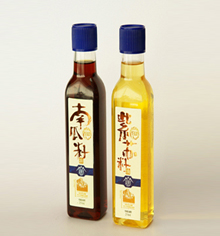 Pumpkin seed oil is a culinary speciality of south eastern Austria (Styria), eastern Slovenia (Styria and Prekmurje), north western Croatia (esp. Međimurje) and the adjacent regions of Hungary. Today the oil is an important export commodity of Austrian and Slovenian parts of Styria. The viscous oil is light green to dark red in colour depending on the thickness of the observed sample. The oil appears green in thin layer and red in thick layer. Used together with yogurt, the colour turns to bright green and is sometimes referred to as "green-gold".

Pumpkin seed oil has an intense nutty taste and is rich in polyunsaturated fatty acids. Browned oil has a bitter taste. It serves as a salad dressing when combined with honey or olive oil. A typical Styrian dressing consists of pumpkin seed oil and cider vinegar. But the oil is also used for desserts, giving ordinary vanilla ice-cream an exquisite nutty taste. Using it as a cooking oil, however, destroys its essential fatty acids.

Other types of pumpkin seed oil are also marketed worldwide. International producers use white seeds with shells and this produces a cheaper white oil. New producers of seeds are located in China and India. 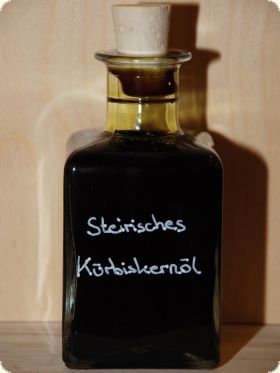 Steirisches Kübiskernöl is an Austrian pumpkin seed oil with g.g.A. protection. It is a dark, viscous edible oil used mainly as salad oil. Produced from Styrian pumpkin seeds (Cucurbita pepo var. styriacd) which grow without skin, using a gentle pressing process. It is high in polyunsaturates and has highly nutritious ingredients.

Styrian pumpkin seed oil is pressed exclusively in the traditional area in southern Styria (administrative districts of Deutschlandsberg, Feldbach, Fürstenfeld, Graz and environs, Hartberg, Leibnitz, Radkersburg, Voitsberg and Weiz), southern Burgenland (districts of Jennersdorf and Güssing), and in parts of Lower Austria (administrative districts of Hollabrann, Horn, Mistelbach, Melk, Gänseradorf - only in the judicial district of Zistersdorf- and Komeuburg-Stockerau -only in the judicial district of Stockerau).

The predominantly moist, warm climate in the cultivated areas (Illyrian, lower alpine climate in Styria) means that the Styrian oil pumpkin does not ripen until autumn. This produces the high unsaturated content. Cultivation plays a major economic role in the abovementioned areas, maintaining the small farm structure there (cultivated area at present around 10 000 hectares). The production of Styrian pumpkin seed oil is an important employment factor and provides income for about 70 commercial oil mills in adjacent areas threatened by depopulation. Consumers prefer Styrian pumpkin seed oil.

The development of the oil is closely linked to the history of Styria. It has been proved that oil was being pressed from pumpkin seeds as early as the 18th century. The traditional pressing process and the cultivation of skinless pumpkin seeds developed in Styria. Mechanisation of harvesting and processing also developed there.

The skinless pumpkin seeds, washed and dried, are ground, gently split, then pressed. This gentle process retains most of the precious ingredients in Styrian pumpkin seeds.