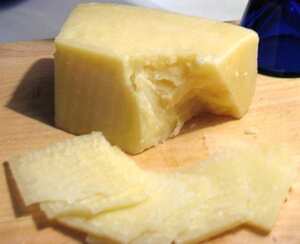 Pecorino Romano is a hard, salty Italian cheese, suitable primarily for grating, made out of sheep milk (the Italian word pecora, from which the name derives, means sheep). Pecorino Romano was produced in Latium up to 1884 when, due to the prohibition issued by the city council of salting the cheese inside their shops in Rome, many producers moved to the island of Sardinia. It is produced exclusively from the milk of sheep raised on the plains of Lazio and in Sardinia. Most of the cheese is now produced on the island, especially in Gavoi.

Pecorino Romano was a staple in the diet for the legionaries of ancient Rome. Today, it is still made according to the original recipe.

Pecorino Romano is most often used on pasta dishes, like the better-known Parmigiano Reggiano (parmesan). Its distinctive aromatic, pleasantly sharp, very salty flavour means that in Italian cuisine, it is preferred for some pasta dishes with highly-flavoured sauces, especially those of Roman origin, such as bucatini all'amatriciana. The sharpness depends on the period of maturation which varies from five months for a table cheese to at least eight months for a grating cheese.

Pecorino Romano should not be confused with Pecorino Toscano (from Tuscany) or Pecorino Sardo (from Sardinia). Unlike Pecorino Romano, these cheeses (which are not particularly salty) are generally eaten by themselves or in sandwiches.