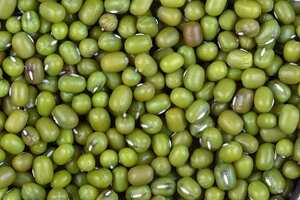 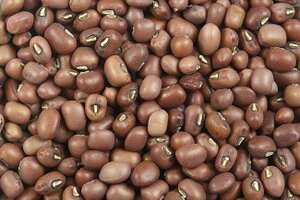 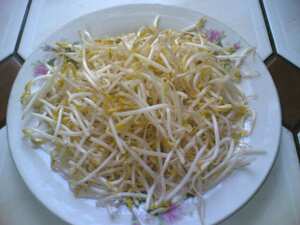 Mung bean, also known as green bean, mung, moong, mash bean, munggo or monggo, green gram, golden gram, and green soy, is the seed of Vigna radiata which is native to India. The split bean is known as moong dal, which is green with the husk, and yellow when dehusked. The beans are small, ovoid in shape, and green in colour. The English word "mung" derives from the Hindi moong.

Mung beans are commonly used in Chinese cuisine, as well as in Japan, Korea, India, Thailand and Southeast Asia. They are generally eaten either whole (with or without skins) or as bean sprouts, or used to make the dessert "green bean soup". The starch of mung beans is also extracted from them to make jellies and "transparent/cellophane" noodles. In Vietnam, the transparent wrapping of Vietnamese spring rolls is made from mung bean flour. In Filipino cuisine, meat is sauteed with garlic, onions, and bay leaves, then mung beans are added and cooked. Mung batter is used to make crepes named Pesarattu in Andhra Pradesh, India.

Whole mung beans are generally prepared from dried beans by boiling until they are soft. In Chinese cuisine, whole mung beans are used to make a tong sui, or dessert, otherwise literally translated, "sugar water", which is served either warm or chilled, and is considered an antidote to thirst. In Indonesia, they are made into a popular dessert snack called es kacang hijau, which has the consistency of a porridge. The beans are cooked with sugar, coconut milk, and a little ginger. Although whole mung beans are also occasionally used in Indian cuisine, beans without skins are more commonly used; but in Kerala, whole moong dal (cheru payaru) is commonly boiled to make a dry preparation that is often had with rice gruel (kanji). In the Philippines, it is the main ingredient of the dessert hopiang munggo.

With their skins removed, mung beans are light yellow in colour. They are made into mung bean paste by de-hulling, cooking, and pulverizing the beans to the consistency of a dry paste. The paste is sweetened and is similar in texture to red bean paste though the smell is slightly more bean-like. In several Asian countries, de-hulled mung beans and mung bean paste are made into ice creams or frozen ice pops and are very popular dessert items. In Taiwan, mung bean paste is a common filling for moon cakes. In China, the boiled and shelled beans are used as filling in glutinous rice dumplings eaten during the dragon boat festival.

Dehulled mung beans can also be used in a similar fashion as whole beans for the purpose of making sweet soups. Mung beans in some regional cuisines of India are stripped of their outer coats to make mung dal. In other regions of India such as Andhra Pradesh, a delicious vegetable preparation is made using fresh grated coconut, green chillies, mung and typical South Indian spices - asafoetida, turmeric, ginger, mustard seeds and urad lentil. In south Indian states, mung beans are also eaten as pancakes. They are soaked in water for 6 to 12 hours (the higher the temperature the lesser soaking time). Then they are ground into fine paste along with ginger and salt. Then pancakes are made on a very hot griddle. These are usually eaten for breakfast. This provides high quality protein in a raw form that is rare in most Indian regional cuisines. Pongal is another recipe that is made with rice and mung beans without skin.

In Kerala, It is commonly used to make the parippu preparation in Travancore region (unlike Cochin and Malabar where toor dal, tuvara parippu, is used). It is also used, with coconut milk and jaggery) to make the a type of payasam.

In India the mung beans are also consumed as a snack. The dried mung beans are soaked in water, then partly dried to a dry matter content of approx. 42% before and then deep-fried in hot oil. The frying time varies between 60 and 90 seconds. The fat content of this snack is around 20%. This snack is traditionally prepared at home and is now also available from industrial producers.

Mung bean sprouts are germinated by leaving them watered with 4 hours of daytime light and spending the rest of the day in the dark. Mung bean sprouts can be grown under artificial light for 4 hours over the period of a week. Fluorescent bulbs or incandescent light bulbs would be the best to use for mung bean sprouts. They are usually sold simply as "bean sprouts".

Mung bean sprouts are stir fried as a vegetable accompaniment to a meal, usually with ingredients such as garlic, ginger, spring onions, or pieces of salted dried fish to add flavour. Uncooked bean sprouts are used in filling for Vietnamese spring rolls.

How to cook mung beans in a pressure cooker