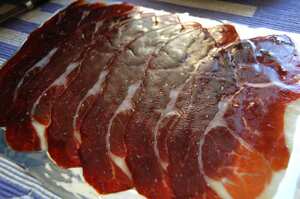 Jamón ibérico is a type of jamón, a cured ham produced only in Spain and Portugal (when produced in Portugal it is known as presunto). It is at least 75% Black Iberian Pig, also called the cerdo negro or black pig, the only breed of pig that naturally seeks and eats mainly acorns: according to Spain's Denominación de Origen rules on food products jamón ibérico may be made from cross-bred pigs as long as they are at least 75% ibérico.

The Black Iberian Pig lives primarily in the south and southwest parts of Spain, including the provinces of Salamanca, Ciudad Real, Cáceres, Badajoz, Seville, Córdoba and Huelva. As well as in the Southeast of Portugal (Barrancos), where it is referred to as Porco de Raca Alentejana. Immediately after weaning the piglets are fattened on barley and maize for several weeks. The pigs are then allowed to roam in pasture and oak groves to feed naturally on grass, herbs, acorns, and roots, until the slaughtering time approaches. At that point the diet may be strictly limited to acorns for the best quality jamón ibérico, or may be a mix of acorns and commercial feed for lesser qualities.