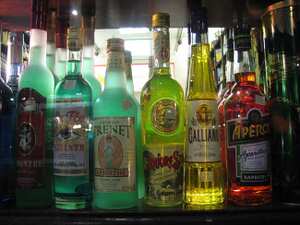 Galliano, properly known as "Liquore Galliano L'Autentico", is a sweet herbal liqueur created in 1896 by Italian distiller and brandy producer Arturo Vaccari of Livorno in Tuscany. Vaccari named the spirit after Giuseppe Galliano, an Italian hero of the First Italo–Ethiopian War at the end of the 19th century. Its vivid yellow colour, currently derived from Tartrazine (a lemon-yellow azo dye), symbolised the Gold Rushes of the 1890s.

Galliano is 60 proof (30% by volume). Among its approximately 30 herbal ingredients are star anise, Mediterranean anise, ginger, citrus and vanilla.

Galliano has a similar appearance to Strega (liqueur), another Italian herbal liqueur. Galliano is sweet and has a complex, vanilla-anise flavour with subtle citrus and woodsy herbal under notes. It is used both as a digestif (meant for drinking after heavy meals), and as an ingredient for cocktails, most notably the Harvey Wallbangers.

The vanilla top note differentiates Galliano from other anise-flavoured liqueurs such as Sambuca, Pernod, Anisette. Galliano is produced by first infusing grain-neutral alcohol with the herbal flavouring agents, distilling the liquid, and then infusing with pressed vanilla. In the final production stage, the vanilla-herb base infusion is blended with distilled water, refined sugar and pure neutral alcohol.

Galliano is also a key ingredient in mixed cocktails such as the Yellow Bird, Golden Cadillac, and Golden Dream.