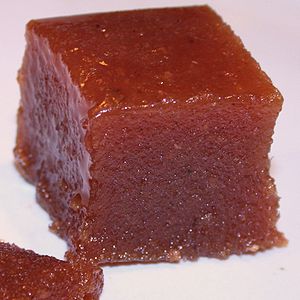 Dulce de membrillo or carne de membrillo or ate de membrillo in Spanish, marmelada in Portuguese, codonyat in Catalan, cotognata in Italian and membrilyo in Tagalog, is a sweet spread or a dessert (quince paste, quince jelly, quince candy or quince meat).

Traditionally and predominantly from Portugal, Italy (exported when the South of Italy was part of the Kingdom of Aragón) and Spain, dulce de membrillo is a firm, sticky, sweet reddish hard paste made of the quince (Cydonia oblonga) fruit. Dulce de membrillo is also very popular in America, in Brazil (as marmelada), Uruguay, Argentina, Chile, Peru, and Mexico and in Israel, as a typical Sephardi dish.

Dulce de membrillo is made of quince fruit, sugar and water, cooked over a slow fire. It is sweet and mildly tart, and similar in consistency, flavour and use to guava cheese or guava paste. It is sold in squares or blocks, then cut into thin slices and spread over toasted bread or sandwiches, plain or with cheese, often served for breakfast or as a snack, with manchego cheese or mató cheese. It is very often used to stuff pastries.

Guava cheese, although it contains no quince fruit, is also called membrilyo in the Philippines, a former Spanish colony, where it forms a part of the traditional nochebuena array on Christmas Eve.