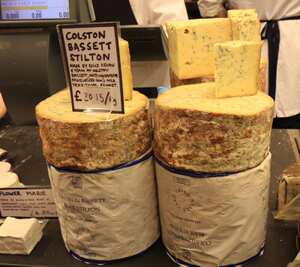 Stilton is a English cheese. It is produced in two varieties: the well-known blue and the lesser-known white. Both have been granted the status of a protected designation of origin by the European Commission. Only cheese produced in the three counties of Derbyshire, Leicestershire, and Nottinghamshire – and made according to a strict code – may be called "Stilton". Blue Stilton is often eaten with celery or pears. It is also commonly added as a flavouring to vegetable soup, most notably to cream of celery or broccoli. Alternatively it is eaten with various crackers, biscuits and bread. Traditionally, port is drunk with blue Stilton. The cheese is traditionally eaten at Christmas. The rind of the cheese is rarely eaten due to its bitter flavour.

White Stilton has not had the Penicillium roqueforti mold introduced into it which would otherwise lead to the blue veining normally associated with Stilton.

A 2005 study carried out by the British Cheese Board claimed that when it came to dream types, Stilton cheese seemed to cause odd dreams, with 75% of men and 85% of women experiencing bizarre and vivid dreams after eating a 20 gram serving of the cheese half an hour before going to sleep.

If the Stilton cheese is not listed below, select a similar type of cheese from the list below to get a rough idea for the number of calories in Stilton cheese.