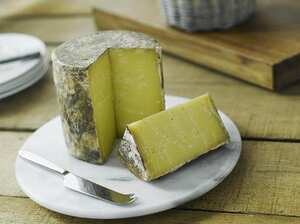 The cheese has the following characteristics:

Flavour : A nutty, full, rounded flavour with a hint of sharpness

Age : Matured for at least 9 months

All farms making West Country Farmhouse Cheddar will use the same basic recipe but there will be slight variations in product between farms depending on the techniques used and the source of their milk. Fresh cows' milk is collected regularly (and normally on a daily basis) from the farm(s) of the Farmhouse Cheddar Maker (in fact some 50 % of all milk comes from the farms) and where required from other farms. At most times of the year this milk will come from farms within the defined geographical area but there will be occasions when milk will be supplied from other parts of England eg to cover seasonal shortfalls in supplies.

The milk may be standardised according to season particularly when the natural balance in the milk between fat and casein differs significantly from a ratio of 1:0.7. Milk is tested prior to use to determine its suitability for West Country Farmhouse Cheddar production. If the maker produces West Country Farmhouse Cheddar from pasteurised milk, the milk will first be pasteurised. From here the process of manufacture is similar regardless of whether the milk is pasteurised or not.

The milk will be pumped into stainless steel vats and brought to the required temperature. Starter culture is then added to produce the acidity in the milk required during the early stages of cheese making. The starter is mixed into the milk before rennet (natural animal rennet or vegetable rennet) is added to coagulate the milk. After the milk has been allowed to coagulate the curds are cut either by hand or by knives attached to paddles in the cheese vat. This process causes the milk to divide between the curds and whey which are then scalded at a temperature of around 103 to 106F. This scalding process involves constant heating and stirring until the desired level of acidity is reached and the whey is extracted from the curds. Throughout this process it is the skill of the cheese maker which determines the correct balance between time, temperature and acidity necessary to make West Country Farmhouse Cheddar.

When the scalding process is complete the curds and the whey have to be separated. This is done either in the cheese vat or on a cooling table. Surplus whey is allowed to drain off through wire strainers which prevent the loss of valuable curd. During this separation process the curds have to be pulled back from the centre to allow a channel to be formed for effective drainage of the whey. The curds are then allowed to cool whence they are cut into large rectangular pieces ready for "cheddaring".

The "cheddaring" of the curds is a technique unique to the manufacture of Cheddar cheese. It is a labour intensive process which is still done by hand in the manufacture of West Country Farmhouse Cheddar. The rectangular pieces of curd are turned and stacked by hand on top of each other along the side of the vat or cooling table so assisting the drainage of whey from the curd. This continues until the correct level of acidity is reached at which stage the curds are ready for milling. Milling involves cutting the curd into small cubes after which it is salted and mixed thoroughly. The salted curds are then put into moulds the shape and size of which will vary between different West Country Farmhouse Cheddar makers. Cylindrical moulds are still used by some makers. Most makers will use rectangular moulds since blocks are better suited to the needs of supermarkets who sell most of their cheese in a pre packed form.

The cheese is pressed within the moulds to remove any excess moisture; each maker will vary the length of time for pressing and the pressure applied according to the cheese maker’s preference. Some makers will then scald the cheeses by bathing them in hot water so as to seal them before returning them to the presses for a final pressing. The process for wrapping West Country Farmhouse Cheddar after pressing may differ between cylinders and blocks. In the case of cylinders, the cheeses are sealed either by bandaging them in muslin cloth that has been dipped in melted lard or a suitable natural fat or oil or by smearing this onto the outside of the cheese which is then bandaged. This bandaging helps form a hard rind on the cheese during maturation so allowing the cheese to breath, yet preventing mould penetration. This bandaging is removed prior to sale.

The cylindrical cheeses are placed in temperature and humidity controlled stores and are turned regularly to ensure an even distribution of moisture loss. In the case of rindless rectangular blocks, the cheeses are wrapped after pressing in a food grade semi permeable membrane and then packed in wooden slats or boxes for ripening and maturing. Wrapped in this way the cheese does not lose moisture during maturation and so the maker will tend to produce a drier curd than would be the case for a cylindrical cheese. Some cylindrical cheese is also packed in a similar way during the early stages of maturation before a rind is allowed to form. Length of storage of both cylindrical and block West Country Farmhouse Cheddar will vary but it will be for a minimum of 9 months.

During the maturation process representative samples of cheeses produced from each vat will be graded at between 2 and 4 months of age to determine the development of the cheese. Cheese which is not expected to develop the necessary flavour characteristics associated with West Country Farmhouse Cheddar will be sold as standard Cheddar. After the required maturation period, the Cheese will be reviewed and then selected according to the needs of individual customers.