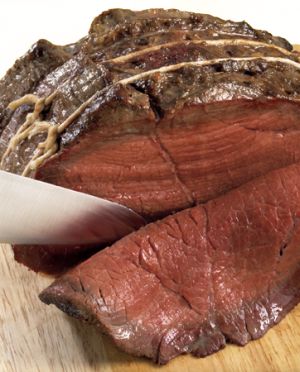 PGI Welsh Beef is defined as meat taken from cattle which are bred, born and reared in the geographical area of Wales. The breeds producing the meat are the indigenous Welsh Black Breed, the Hereford from the adjacent English Border country, and these breeds crossed with each other or with any other recognised beef breed. After slaughter and dressing the beef may be marketed as a whole body, as a whole side, as part sides (hindquarter/forequarter) or as cuts of beef (including minced beef). Meat profiles on the whole are convex, with very good muscle development and a wide, thick back, up to a well rounded shoulder. Solid to the touch, with a loose and consistent texture, the well developed muscles are of a deep red nature and have fat that is yellowish white. The meat is generally well marbled.

The unique reputation and qualities enjoyed by Welsh Beef come from traditional feeding on abundant grazing in Wales. Welsh grassland is characterised by heavier rainfall, higher land and poorer quality soils than England. The total land area of Wales is 2.1m hectares of which 1.7m hectares (82%) are in some form of agricultural use. The agricultural areas are generally hilly, with 60% of the land lying over 150 metres above sea levels and 27% of the land over 300 metres above sea level. The altitude, combined with steep slopes and high rainfall leads to poor soils and this is reflected in the proportion of low grade land which comprises 80% of the agricultural land. The preponderance of relatively poor land, climatic and other physical constraints over a large area of Wales means that a higher proportion of the land is devoted to a grassland farming system. Over 96% of the agricultural land is under permanent grass or used for rough grazing and just over 10% is grass that is under five years old. The efficient production and use of grass is central to the well being of Welsh agriculture. The grassland management skills of the Welsh farmer is noted world-wide with Welsh farmers regularly winning awards for their grassland management. The grass leys in many of the regions of Wales are interspersed with heathers and indigenous fragrant wild herbs.

The farms of the region are typically family farms having a mixed flock of sheep or herd of cattle. Holdings in Wales are on average smaller than the UK as a whole. The smaller average holdings is reflected in smaller herd sizes for beef (around 22 in Wales) as well as the structure of the workforce. The husbandry skills of the Welsh livestock farmer have been passed down from one generation to the next. The Welsh cattle industry is richly documented for its importance from the Celts, the Romans, the Normans and up to the present day. There are numerous historical references to Welsh cattle production given in 'The Drovers' Roads of Wales' and 'Medieval Wales' by Hewitt.

Animals are sold either dead-weight to abattoirs or at livestock markets. Each producer controls his own herd of beef animals which are reared on relatively extensive farms based on grass feeding whether grazed or conserved as hay or silage. Cattle are slaughtered at between 24-27 months of age. The cattle are slaughtered in approved abattoirs, which are situated in close proximity to the point of production to minimise stress and produce better meat The animals are slaughtered and dressed in the abattoir in accordance with the Meat and Livestock Commission's Standard conditions for deadweight purchase of cattle, sheep and pigs.

After dressing the carcasses are transferred to cold stores where they are kept to a temperature of 3C until taken to refrigerated vehicles kept at a maximum temperature of 4C, for despatch to customers or transfer to a cutting area for breaking down into cuts and joints. If the carcasses are to be divided into cuts, the cuts will be prepared and packaged in accordance with customer requirements. The meat and cuts will be held in temperature controlled environments before despatch to the customers.