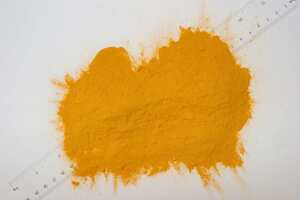 Turmeric (Curcuma longa) is a rhizomatous herbaceous perennial plant of the ginger family, Zingiberaceae which is native to tropical South Asia. It needs temperatures between 20°C and 30°C, and a considerable amount of annual rainfall to thrive.

Its rhizomes are boiled for several hours and then dried in hot ovens, after which they are ground into a deep orange yellow powder commonly used as a spice in curries and other South Asian and Middle Eastern cuisine, for dyeing, and to impart colour to mustard condiments. Its active ingredient is curcumin and it has an earthy, bitter, peppery flavour and a mustard like smell.

Sangli, a town in the southern part of the Indian state of Maharashtra, is the largest and most important trading centre for turmeric in Asia or perhaps in the entire world.

In combination with annatto (E160b), turmeric has been used to colour cheeses, yogurt, dry mixes, salad dressings, butter and margarine. Turmeric is also used to give a yellow colour to some prepared mustards, canned chicken broths and other foods (often as a much cheaper replacement for saffron).

Turmeric is widely used as a spice in Indian and other South Asian cooking. Momos (Nepali meat dumplings), a traditional dish in South Asia, are spiced with turmeric.

You will probably have to buy ready ground turmeric. Keep it out of the light otherwise it loses it's brilliant colour. 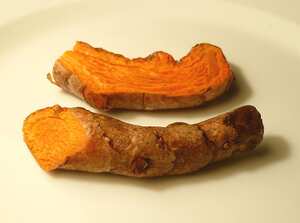