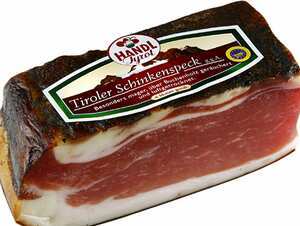 Tiroler Speck is an Austrian type of bacon ham with g.g.A. protection. The prime material for Tiroler Speck derives from the followed deboned and trimmed cuts of pork:

- loin and best end of neck

Tiroler Speck is lightly salted, spiced with a special mixture in line with local customs and traditions, stored in special rooms at between 18C and 20C and exposed to aromatic smoke. The outer colour is smoky brown; when cut the speck is reddish in colour with a white layer of back fat. Its odour is lightly aromatic with a clearly distinguishable hint of smoke. The taste is spicy, characterised by the special spice mixtures and a particular smoking process, and only slightly salty.

Tiroler Speck may only be produced by authorized commercial and agricultural producers or processors in the Austrian Federal State of Tyrol. Over many generations the production of Tiroler Speck became a traditional method of processing meat in the largely rural, mountainous region of Tyrol where there was no possibility of cooling fresh meat. The dry curing in pure mountain air, an essential part of the process, and the careful smoking using special spice mixtures and beech and ash wood give Tiroler Speck its typical characteristics. Recipes for the spice mixtures and the method of producing Tiroler Speck were handed down from the farmers to their children. This individual handed-down tradition developed into a general business practice for the commercial production of Tiroler Speck that exists today. Many generations have held it in high esteem on account of its high nutritional value, long life and the variety of uses to which it can be put.

Tyroler Speck has been an essential ingredient in local rural cuisine for hundreds of years. The age-old tradition of speck in Tyrol is documented. One of things mentioned by Nikolaus Graff and Hermann Holzmann in their book "Geschichte des Tiroler Metzgerhandwerkes" (History of the butcher's art in Tyrol) (Universitätsverlag Wagner 1982) is the setting of prices for a pound of speck, together with pork sausages, on 23 July 1573. Other parts of the book provide further evidence of the importance of speck in Tyrolean culinary tradition. For example, there is a report of large pieces of pork being bought at market and processed into speck for the private sector. "Most of the pig was salted, then cured and was served throughout the year in the form of speck and cured meat."

The following criteria must be observed when processing the cuts:

- All cuts being processed into Tiroler Speck must be trimmed in the traditional manner;

- the meat must be dry-salted (a mixture of salt and spices must be rubbed into it dry) and cured;

- smoking and the concomitant drying process is to take place at a maximum smoke and room temperature of I0C;

- air curing and maturing must be done at a room temperature of between 10C and 15C and a relative humidity of 60% to 80%. Adequate air circulation must be ensured;

- drying and maturing must be uniform so as to prevent the forming of a dry rind; the products must be kept free of parasites and noxious organisms;

- the cuts mentioned must not be injection cured or tumbled;