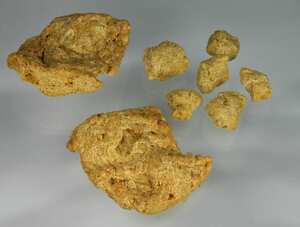 Textured vegetable protein (TVP), also known as textured soy protein (TSP), soy meat is a meat substitute made from defatted soy flour, a by product of making soya bean oil. It is quick to cook, high in protein, and low in fat.

TVP is made through a process known as "extrusion cooking". A dough is formed from high PDI (Protein Dispersibility Index) defatted soy flour and water in a "preconditioner" (mixing cylinder) and cooked during passage through the barrel of a screw type extruder. Sometimes steam from an external source is employed to aid in the cooking process. Upon exiting the die, superheated steam escapes, rapidly producing an expanded, spongy yet fibrous lamination of thermoplastic soy flour which takes on the various shapes of the die as it is sliced into granules, flakes, chunks, etc. by revolving knives, and then dried in an oven.

TVP made from soy flour contains 50% soy protein and needs to be rehydrated before use, at a weight ratio of 1:2 with water. However, TVP when made from soy concentrate contains 70% protein and can be rehydrated at a ratio of 1:3. It can be used as a meat replacement or supplement. The extrusion technology changes the structure of the soy protein, resulting in a fibrous spongy matrix that is similar in texture to meat.

When stored dry at room temperature TVP has a shelf life of more than a year, but after rehydration it should be used at once or stored for no more than three days in the fridge. It is usually rehydrated with cold or preferably hot water, but a bit of vinegar or lemon juice can be added to as a preservative.