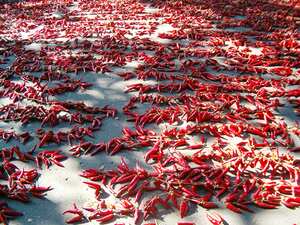 Drying in the sun 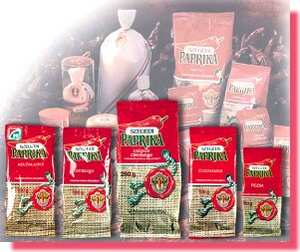 The organoleptic characteristics of Szegedi fűszerpaprika-őrlemény are as follows:

In addition to the above, hot varieties have a dominant hot flavour. The intensity of heat is determined by the capsaicin content. If this is 100-200 mg/kg, the ground paprika will taste moderately hot; if it exceeds 200 mg/kg, it will taste hot.

The raw paprika produced within the administrative border of the following localities in the Szeged paprika-growing region may be used as the raw material for Szegedi fűszerpaprika-őrlemény with the protected designation of origin:

Production and packaging must be performed within the same geographical area.

The traceability of the product is ensured by the documents generated in the course of registering the producers and processors, during production and processing, the best-before dates recorded on the packaging materials, the LOT numbers and the numbered labels issued by the Consortium. Compliance with the rules is monitored by the regional offices of the Agriculture Administration Office.

As the first step of production, the production area is prepared. Subsequently, depending on the chosen production method, the seeds are sown or the seedlings planted. Where seedlings are used, they are grown between the end of February and the beginning of April. They are planted in May by hand or using mechanical transplanters. Where seeds are used, they are sown in early April. The production process involves the following plant-care procedures that contribute to the optimal development of the paprika plant: watering, fertilisation, plant protection.

The paprika is harvested in several stages, according to ripeness of the pods.

Ideally, the harvested pods are kept in storage for post-ripening (in well-ventilated facilities) for a period of two weeks, according to methods determined by the technical possibilities of the producers.

Subsequently, the post-ripened pods are prepared for drying. They are selected, washed and sliced. These operations fundamentally influence the quality of the end product.

The paprika can be dried in small sacks hung under eaves, in drying chambers or with conveyor-belt driers. By the end of drying, the water content of the paprika pods will have reduced from approx. 80 % to below 10 %.

Following preliminary chopping, the dried paprika is ground by passing it through a tightly set pair of horizontal millstones. The significance of grinding by millstones lies in the fact that as the paprika passes through the millstones, it warms up. Warming and grinding releases the oil in the seeds and the fat-soluble pigments in the skin, which in turn coat the plant granules, giving the ground paprika an even colour.

The final phase of grinding by millstones is the conditioning process, in the course of which the moisture content of the ground paprika is increased by 1.5-3 % through intensive mixing and the addition of potable-grade water. Conditioning assumes an important role in developing the visual features of the ground paprika, in that the process ensures an optimal medium — with a water content of 8-11 % — for the bioactive components of the ground paprika to exert their protective effect on the natural pigments. At the end of the grinding process, the paprika is sifted through a sieve with a mesh aperture diameter of ≤ 0.5 mm, and packaged using methods and materials in compliance with food health regulations.

The above-described post-ripening, grinding and conditioning fundamentally determine the quality of the product, which can only be guaranteed by immediate packaging in order to prevent changes in the water content set in the conditioning procedure. The complexity of these procedures requires expertise available only in the given geographical area. Therefore, in an effort to ensure not only the origin but also the quality of the product, every phase in the production of Szegedi fűszerpaprika-őrlemény — i.e. growing and processing the raw material, and packaging — must be performed in the geographical area.

The first written record of the link between paprika and the town of Szeged originates from 1748. Initially, paprika was an ornamental plant and a medicinal herb, and only later became a principal spice in Hungarian cuisine. While production was limited to satisfying household needs until the mid-19th century, by the end of the century paprika processing reached industrial proportions and trade grew significantly.

Paprika production in this region started in lower Szeged; the residents of this part of town produced paprika in the black sandy soils of the floodplain of the river Tisza. From the turn of the century to the 1930s, the area of paprika crops increased from 2,000 to 5,000 Hungarian acres. After World War One, Szegedi fűszerpaprika-őrlemény — available until then in pharmacies only — went on from Austria to make fame in Germany, and soon exports to the USA began. In 1934, the Szeged area was declared a restricted zone, and ground paprika produced outside the zone could not be sold as Szegedi fűszerpaprika-őrlemény. By that time, the majority of paprika-producing Szeged families had been growing paprika for 3-4 generations, and there were 10-20 mills in the area.

The ground paprika is produced from paprika varieties with an elongated, drooping fruit grown in the Szeged area. Thanks to century-old traditions of plant breeding, the varieties that have preserved these genetic features have adapted extremely well to the soil and climate of the region. The ground product — following post-ripening, selection, rinsing and gentle drying of the raw pepper pods — was produced by grinding by millstones, providing the best quality. After grinding, the paprika was spread out for the night in a cool larder, allowing the ground paprika to absorb the right quantity of water from the moisture content of the air. The conditioning procedure using modern technology is based on this phase of traditional peasant paprika processing.

The exceptional qualities of the product originate not only from the hundreds of years of care, expertise and traditional processing techniques described above, but also from the agricultural and climatic conditions in the region. Alluvial and marsh soils with a good drainage and high humus levels emerged on the Holocene river areas of the Szeged region, in the natural floodplains of the Körös, Maros and Tisza rivers. The Tisza brought loess and mud deposits to the area; the Maros sand and the Körös fine sand. The breeding of the described paprika varieties has been made possible by the easily warming, non-cracking, salt-free soils with good air and water drainage, which developed on the unique deposits of these rivers.

The number of hours of sunshine in the Szeged region is around 2,000 a year, making it one of the warmest regions in Hungary. The paprika here will never ripen to the same extent as in the southern paprika-growing countries (which, by comparison, have 3,000 hours of sunshine a year). Consequently, at the time they are harvested, the Szegedi fűszerpaprika-őrlemény pods have a residual sugar content. The characteristically sweet flavour of the ground paprika comes from the condensation reaction between part of these sugars and the pod’s protein content, the caramelisation of the sugar caused by the drying and grinding process, and the oils in the seeds.

Paprika’s temperature requirement in the growing season is at least 30°C. The average heat sum in the Szeged region is approx. 34 °C, ensuring that paprika grown in the region ripens to a brilliant red. At the same time, the ground paprika owes its characteristic colour to post-ripening, which precedes drying in the region’s traditional paprika-producing procedure. This procedure is also connected to the climatic features of the region, in that by the end of a relatively short growing period, only a part of the harvest will have developed the features of quality genetically encoded in these varieties. The post-ripening of the paprika brings out further characteristics that contribute to good quality. In the course of post-ripening, natural desiccation (loss of water) causes a drop in sugar levels, but never to an extent that would alter the product’s characteristic flavour. At the same time, the total pigment content increases by 30-50 %, together with the amount of red pigments. The pigment content of post-ripened ground paprika is higher and more stable than that of paprika that is immediately dried and ground.