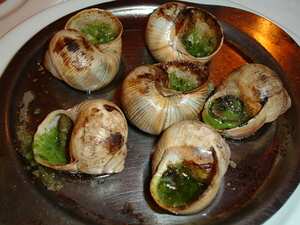 A number of archaeological sites around the Mediterranean have been excavated yielding physical evidence of culinary use of several species of snails utilized as escargot. The Romans, in particular, are known to have considered snails as an elite food, as noted in the writings of Pliny. For example the species Otala lactea has been recovered from Volubilis in present day Morocco. This archaeological recovery is from an era of Roman occupation of this provincial capital, which site was known to embody a very highly developed ancient civilisation.

In Western culture, typically the snails are removed from their shells, gutted, cooked (usually with garlic butter or chicken stock) and then poured back into the shells together with the butter and sauce for serving, often on a plate with several shell-sized depressions. Additional ingredients may be added such as garlic, thyme, parsley and pine nuts. Special snail tongs (for holding the shell) and snail forks (for extracting the meat) are also normally provided. Like most molluscs, snails are high in protein and low in fat content (if cooked without butter). It is estimated that snails are 15% protein, 2.4% fat and about 80% water.

Edible land snails range in size from about one millimetre long to the giant African snails, which occasionally grow up to 32.6 cm in length. "Escargot" most commonly refers to either Helix aspersa or to Helix pomatia, although other varieties of snails are eaten. Achatina fulica, a giant African snail, is sliced and canned and passed off on some consumers as escargot. Terms such as "garden snail" or "common brown garden snail" are rather meaningless since they refer to so many types of snails, but they sometimes mean H. aspersa.

Helix aspersa is also known as the French "petit gris," "small grey snail," the "escargot chagrine," or "la zigrinata." The shell of a mature adult has four to five whorls and measures 30 to 45 mm across. It is native to the shores of the Mediterranean and up the coast of Spain and France. It is found on many British Isles, where the Romans introduced it in the first century AD (Some references say it dates to the Early Bronze Age.) In the early 1800s the French took it into California where it has become a serious pest. These snails are now common throughout the U.S. It was introduced into several Eastern and Gulf states even before 1850 and, later introduced into other countries such as South Africa, New Zealand, Mexico, and Argentina. H. aspersa has a life span of 2 to 5 years. This species is more adaptable to different climates and conditions than many snails, and is found in woods, fields, sand dunes, and gardens. This adaptability not only increases H. aspersa's range, but it also makes farming H. aspersa easier and less risky.

Helix pomatia measures about 45 mm across the shell. It also is called the "Roman snail," "apple snail," "lunar," "la vignaiola," the German "Weinbergschnecke," the French "escargot de Bourgogne" or "Burgundy snail," or "gros blanc." Native over a large part of Europe, it lives in wooded mountains and valleys up to 2,000 metres (altitude and in vineyards and gardens. The Romans may have introduced it into Britain. Immigrants introduced it into the U.S. in Michigan and Wisconsin. Many prefer H. pomatia to H. aspersa for its flavour and its larger size, as the "escargot par excellence."

Otala lactea is sometimes called the "vineyard snail," "milk snail," or "Spanish snail." The shell is white with reddish brown spiral bands and measures about 26 to 35 mm in diameter. Many think it tastes better than H. aspersa.

Cepaea nemoralis, the "grove snail," or the Spanish "vaqueta", measures about 25 mm across the shell. It inhabits Central Europe and was introduced into, and is now naturalised in many U.S. states, from Massachusetts to California, and from Tennessee to Canada. Its habitat ranges widely from woods to dunes. It mainly eats dead plant material, but it likes nettles and buttercups and will eat dead worms and dead snails.

Cepaea hortensis, the "white-lipped snail", measures about 20 mm across the shell which often has distinct dark stripes. It is native to central and northern Europe. This species was introduced into Maine, Massachusetts, and New Hampshire in colonial times, but it never became established in these states. Its habitat varies but C. hortensis is found in colder and wetter places than C. nemoralis. Their smaller size and some people's opinion that they do not taste as good make C. hortensis and C. nemoralis less popular thanthe larger European land snails.

Otala punctata, called "vaqueta" in some parts of Spain, measures about 35 mm across the shell.

Eobania vermiculata, the "vinyala," "mongeta," or "xona", measures about 25 mm. It is found in Mediterranean countries and was introduced into Louisiana and Texas.

Helix lucorum, sometimes called "escargo turc," measures about 45 mm across the shell. It is found in central Italy and from Yugoslavia through the Crimea to Turkey and around the Black Sea.

Helix adanensis comes from around Turkey.

Helix aperta measures about 25 mm. Its meat is highly prized. It is native to France, Italy, and other Mediterranean countries and has become established in California and Louisiana. Sometimes known as the "burrowing snail," it is found above ground only during rainy weather. In hot, dry weather, it burrows three to six inches into the ground and becomes dormant until rain softens the soil.

Theba pisana, also called the "banded snail"or the "cargol avellanenc", measures about 20 mm and lives on dry, exposed sites, usually near the sea. Native to Sicily, it has been spread to several European countries, including England. This snail is a serious garden pest and is the "white snail" that California once eradicated by using flamethrowers to burn off whole areas. In large numbers, up to 3,000 snails per tree, it can ravage a garden in 24 hours and a citrus or other crop in a couple of nights.

Achatina fulica and other Achatina species, giant African snails. They can grow up to 32.6 cm in length. Their native range is south of the Sahara in East Africa. This snail was purposely introduced into India in 1847. There was an unsuccessful attempt to establish it in Japan in 1925. It has been purposely and accidentally transported to other Pacific locations and was inadvertently released in California after World War II, in Hawaii, and later in North Miami Florida in the 1970s. In many places, it is a serious agricultural pest that causes considerable crop damage. Also, due to its large size, its slime and fecal material create a nuisance as does the odour that occurs when something like poison bait causes large numbers to die. The U.S. has made considerable effort to eradicate Achatina. The U.S. Department of Agriculture (USDA) bans the importation of, and it is illegal to possess, live giant African snails. However they are still popular in the pet trade.