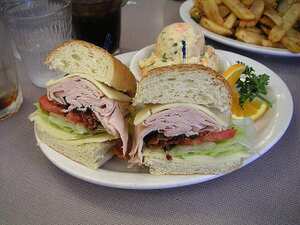 A rather well-filled sandwich 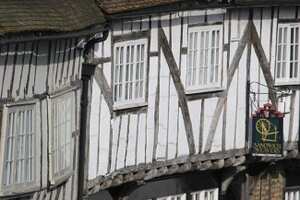 Half-timbered houses from Sandwich, long before it's invention!

A sandwich is a food item made of one or more slices of bread with one or more layers of a filling. The bread can be used as is, or it can be coated with butter, oil, mustard or other condiments to enhance flavour and texture.

The first written usage of the English word appeared in Edward Gibbon's journal, in longhand, referring to "bits of cold meat" as a 'Sandwich'. It was named after John Montagu, 4th Earl of Sandwich, an 18th-century English aristocrat, although he was neither the inventor nor sustainer of the food. It is said that Lord Sandwich was fond of this form of food because it allowed him to continue playing cards, particularly cribbage, while eating without getting his cards greasy from eating meat with his bare hands.