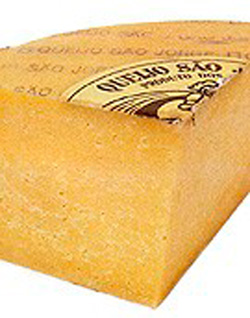 São Jorge is an artisan, DOP, cows’ milk cheese which is produced in tiny factories on the island of the same name in the Azores.

Also known as Queijo da Ilha (island cheese), São Jorge is the largest of Portuguese cheeses weighing up to 7 kg. It is semi-hard to hard with a crumbly, straw-coloured, interior and small holes. The rind is hard, with a smooth surface and a yellow colour, sometimes with chestnut-coloured spots and coated with wax.

The cheese has a strong, clean aroma and a flavour which is both mild and bitter, becoming stronger as it matures. It is allowed to mature for 1-3 months.