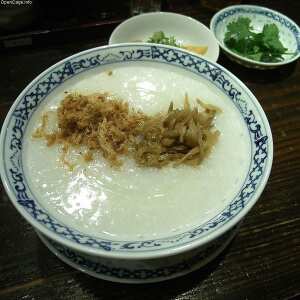 Rice congee is a type of rice porridge that is eaten in many Asian countries.

To prepare the dish, rice is boiled in a large amount of water until it softens significantly. Congee can be made in a pot or in a rice cooker. The type of rice used can be either short grain rice or long grain rice, depending on what is available and regional cultural influences. Culture also often dictates the way congee is cooked and eaten.

In some cultures, congee is eaten primarily as a breakfast food or late supper; while in others, it is eaten as a substitute for rice at other meals.

Congee can be made in a pot or in a rice cooker. Some rice cookers even have a "congee" setting, allowing the user to cook their breakfast congee overnight.

The European version of rice congee would be rice pudding.