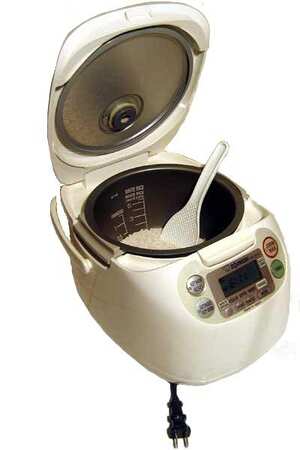 Electric rice cooker including scoop, before cooking process has started

Chef's note When I was deciding whether to add this item to cooking methods, I thought that no self-respecting cook would have a rice cooker. However, this article, taken from Wikipedia, has a verified citation stating over 95% of japanese households own a rice cooker. Maybe I should reconsider!

A rice cooker or rice steamer is a device used primarily for cooking rice. There are self-contained electrical versions, as well as microwave and gas variants.

The preparation of rice has traditionally been a cooking process which requires attention to ensure the rice is cooked properly. Rice cookers simplify the process by automatically controlling the heat and timing, while at the same time freeing up a heating element on the range/hob/cooker. Although the rice cooker does not necessarily speed up the cooking process, the cook's involvement in cooking rice with a rice cooker is reduced to simply adding the required amount of rice and measuring in the correct amount of water. Once the rice cooker is set to cook, the rice will be cooked with no further attention.

Typically, a rice cooker contains an insulated outer container containing a heating element into which is fitted an inner removable bowl (which is sometimes non-stick or Teflon-coated). It often has graduations marked in cups of rice (white). Whereas less expensive and older models use simple electronics and mechanical and thermal sensors, high-end rice cookers use microprocessors to control the cooking process and often incorporate a timer which can be used to set the desired "ready time". Some higher-end rice cookers use induction heating.

Many rice cookers can keep rice warm safely for up to 24 hours. This helps to avoid the dangers of food poisoning due to Bacillus cereus. New rice cookers normally include a small measuring cup, and a plastic paddle for serving the cooked rice. The rice cup measure is normally 180 ml, approximately 25% smaller than the American measuring cup of 8 (US) fluid ounces / 250 ml.

Restaurants that serve a lot of rice, particularly those specializing in Chinese and Indian cusine, often use industrial size rice cookers that quickly and cheaply produce large quantities of cooked rice. A rice cooker, also known as "the ja", is a standard appliance in kitchens in many Asian countries and in many Asian households; indeed a recent survey, as already stated above, showed that over 95% of Japanese kitchens feature such a device.

The bowl in the rice cooker is usually removable, and beneath it lies a heater and a thermostat. These form the main components of the rice cooker. A spring pushes the thermostat against the bottom of the bowl for good thermal contact and to ensure accurate temperature measurement. During cooking, the rice/water mixture is heated at full power. The temperature cannot go above the boiling point of water — 100°C (212°F) — as any heat put into the rice/water mixture at that point will only cause the water to boil. At the end of cooking, some of the water will have been absorbed by the rice and the rest is boiled off. Once the heating continues past that point, the temperature exceeds the boiling point. The thermostat then trips, switching the rice cooker to low power "warming" mode, keeping the rice at a temperature not less than approximately 65°C (150°F). Simple rice cookers, like the one below, may simply turn off at that point. 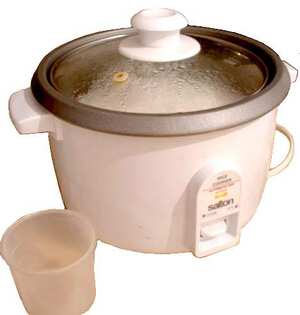 Different kinds of rice require different amounts of water. Usually, there are only graduated marks which refer to the right amount of water for white rice, but sometimes there are separate scales for brown rice (as more water is required) or for cooking other food in the appliance.

Once the lid is closed and the cooking cycle has been activated, the rice cooker does the rest. Higher-end models give a countdown in minutes to the "ready time," or beep when done. Many people prefer to let the rice soak for a while before cooking the rice; additionally, some like to allow the rice to "rest" for a while after cooking before eating the rice. Higher-end models automatically time the soaking and resting periods.

A microwave rice cooker is a microwavable container designed specifically for cooking rice. It consists of three parts: an outer bowl, a fitted lid with steam vents, and an inner bowl with a finely perforated base. A measured amount of dry rice is placed within the inner bowl, which is then washed through with running water to remove surface starch powder from the grains. The water is then allowed to drain through the base of the bowl prior to cooking into the kitchen sink to be discarded. This process may need to be repeated until the water runs clear. The inner bowl is then placed within the outer bowl and a small amount of water is added so that the rice is just about covered. The lid is then fitted and the combined bowls are microwaved at full power for between 8 to 15 minutes (depending on the rice type, power output of the appliance and personal texture preference). Cooking occurs with the water boiling away and steaming the grains. It is very important to follow the manufacturer's instructions regarding the length of time and amount of water added, otherwise the rice can burn.

Microwave rice cookers work well for cooking American long-grain rice, but not so well for stickier varieties such as Japanese rice.

Rice cookers are typically used for the preparation of plain or lightly seasoned rice, but more elaborate recipes are possible using a rice cooker, and there are cookbooks devoted entirely to dishes prepared using a rice cooker. One of the more unexpected dishes that can be made in a rice cooker is a beef stew. By simply adding ingredients and setting it to "warm", a rice cooker would cook that at about 65°C (150°F). In a few hours, the stew is fully cooked and ready to eat.

Some rice cookers are designed to accommodate a basket above the rice. This basket is generally used to steam vegetables, holding them in the steam coming off the rice. Most types of dumpling and buns can also be cooked this way.

Each rice cooker typically comes with the cup that should be used for measuring rice for that particular cooker. The graduations on the bowl for adding water rely on using that particular measuring cup. The rice cooker cups can vary in size, but are typically 180 ml, which is the size of a traditional Japanese cup (gō). The US cup equivalent to 180 ml is three-quarters of a cup. In general, 5 cups of rice cooker capacity is good for a family of 2-3 members.