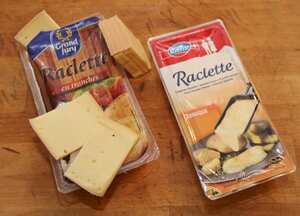 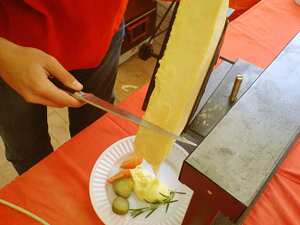 Traditional Raclette is a semi-firm, salted cheese made from cows' milk. However, varieties exist made with white wine, pepper, herbs, or smoked. The cheese originated in the Swiss canton of Valais (where it is also known as Orsières, Gomser or Bagnes, depending on the area of production), but is today also produced in the French regions of Savoie and Franche-Comté and in Leelanau, Michigan in the United States. It is matured for 3-6 months.

Raclette is also a dish indigenous to parts of Switzerland, Wallonia and France. The Raclette cheese round is heated, either in front of a fire or by a special machine, then scraped onto diners' plates; the term raclette derives from the French racler, meaning "to scrape". Traditionally, it is accompanied by small firm potatoes (Bintje, Charlotte or Raclette varieties), gherkins, pickled onions, dried meat, such as prosciutto and viande des Grisons, sliced peppers, tomato, onion, mushrooms, pears, and dusted with paprika and fresh-ground black pepper.

If the Raclette cheese is not listed below, select a similar type of cheese from the list below to get a rough idea for the number of calories in Raclette cheese.