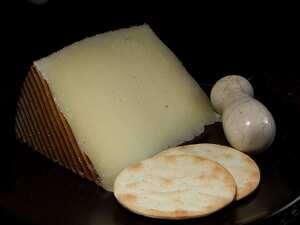 It is called Castilian cheese because it is only produced Castilla-Leon. It was traditionally produced with unpasteurised ewe’s milk, mainly in the provinces of Valladolid and Palencia. Nowadays it is made with pasteurized ewe’s milk, and there is also a variety which has a mixture of cow’s, ewe’s and goat’s milk.

Castilian cheese from unpasteurised milk has a strong aroma and somewhat spicy flavour, which conveys the raw milk. The taste of the variety made with pasteurised milk is strong as well, but does not sting so much. The mixed milk variety is the milder of the three, although it has its own personality.