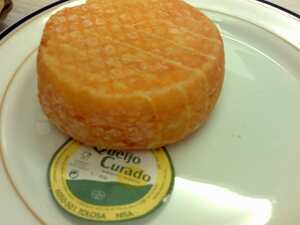 Queijo Mestiço de Tolosa is an IGP cheese made with a mixture of ewes’ and goats milk and either animal or vegetarian rennet. It is produced in Portalegre in the province of Alentejo in east-central Portugal. It can only be produced at approved production units located in the defined geographical area. The milk, from domestic or well-adapted breeds of sheep and goats, are farmed extensively, mainly on natural or improved pastures, cereal stubble or fallow land

The milk is sieved through a special white cloth and is dried using either a traditional method (bain marie over a wood fire) or special tanks. When it reaches a temperature of 30 °C the rennet is added in proportions dictated by tradition and in accordance with the cheese maker’s own practice. After coagulation the solids are placed in cheese presses and squeezed and the curd is allowed to settle for about 15 minutes. Afterwards, without being removed from the presses, the cheese is salted in the traditional manner. After three to four days they are removed from the presses and are allowed to mature for three to four weeks. Between 20 and 25 days into the maturation process a cloth dipped in a mixture of pepper powder and water is wiped over the tops and sides of the cheeses, giving them their typical colour and taste. The ripening is mostly natural, success depending to a large extent on the know-how of the cheese maker and his skill and judgement in maintaining the desired temperatures and ventilation.

The semi-soft, yellowish cheese has a few small holes and a regular shape, with well-defined sharp edges. The rind is slightly rough, thin and smooth, occasionally oily but resistant and is toasted yellow or orange in colour. It weighs between 150 g and 400 g, has a diameter of 7 to 10 cm and a height of 3 to 4 cm. It has a slightly vigorous, clean and piquant taste and a pleasant and distinctive aroma.