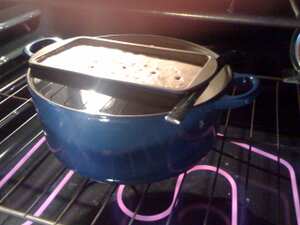 A rather funky bain marie

In culinary terms, a bain-marie' or bain marie (also known as a water bath) is a French term for a piece of equipment used to heat foods gently and gradually to fixed temperatures.

The device's invention is popularly attributed to Mary the Jewess, an ancient alchemist traditionally supposed to have been Miriam, a sister of Moses. The name comes from the medieval-Latin term balneum (or balineum) Mariae â literally, Mary's bath â from which the French bain de Marie, or bain-marie, is derived.